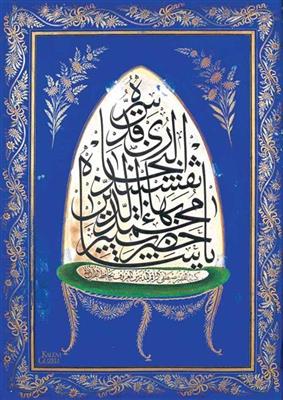 With the revolutionary changes brought about in calligraphy by Mustafa Rakim, Turkish calligraphic art history is divided in two by researchers: Pre-Rakim and Post-Rakim. He was able to accomplish what nobody before him could in the Jali-Thuluth script and tughras of sultans. By finding the ideal measurement between the letter thickness and pen (writing tool) thickness, he established the style and form for the ideal beauty of tughras. He is regarded as the first great Turkish painter in the Western sense of painting. His bird, parrot, painting is considered to be the first realist work of Turkish painting. He drew a portrait of Sultan Selim III who was amazed by his work and recited a poem in his honor in return.