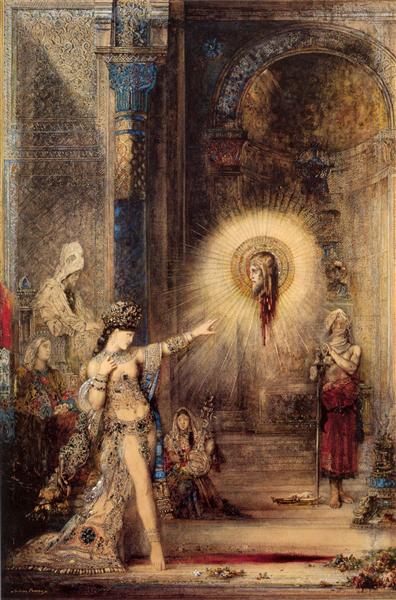 The Apparition (French: L'Apparition) is a painting by French artist Gustave Moreau, painted between 1874 and 1876. It shows the biblical character of Salome dancing in front of Herod Antipas with a vision of John the Baptist's head. The 106 cm high and 72,2 cm wide watercolor held by the Paris Musee d'Orsay elaborates an episode told in the Gospel of Matthew 14:6-11 and Mark 6:21-29. On a feast on the occasion of Herod Antipas' birthday, the princess Salome dances in front of the king and his guest, pleasing him so much he promises her anything she wished for. Incited by her mother Herodias, who was reproved by the imprisoned John the Baptist for her illegitimate marriage to Herod, Salome demands John's head in a charger. Regretful but compelled to keep his word in front of his peers, Herod fulfills Salome's demand. John the Baptist is beheaded, the head brought in a charger and given to Salome, who gives it to her mother.

Moreau approached the biblical theme in 19 paintings, 6 watercolors and more than 150 drawings. Part of a series of at least 8 closely resembling paintings and more than 40 sketch drawings, it is regarded a key work of Moreau's opus, symbolism and fin de siècle art in general. Upon its first presentation 1876 in Salon (French: Salon de Paris), the painting caused a sensation. It has since made a lasting impression on various artists, notably from the Decadent movement.

Against the backdrop of a lavishly decorated palace inspired by the Alhambra Salome stands out in an array of bejeweled veils, her body facing the viewer, her left arm pointing up in the air to John the Baptist's hovering head, enclosed by a halo. At the back in the half-light stands the executioner with his sword, at his feet the silver charger. Seated in ascending position on Salome's side are a lutanist, Herodias and Herod Antipas. They face the foreground events seemingly lit by John's halo and its reflections on Salome's costume. The severed head recalls a Japanese print copied by Moreau at the Palais de l'Industrie in 1869 as well as the severed head of Medusa as held by Benvenuto Cellini's bronze Perseus with the head of Medusa in Florence (Loggia dei Lanzi). Since no one, including Salome, reacts directly to the vision central to the composition, it is unclear if it is real, imagined by the princess or a collective hallucination. This deliberately confusing technique has been attributed to an alleged consumption of opium and thereby caused hallucinations, though justification of such claims was never established. Its surreal setting and mystic air, evoked by obscure architectural and textile opulence, contrast with previous interpretations of the subject, making The Apparition a key work for the emerging symbolist movement.

Belgian art dealer Léon Gauchez bought The Appariton in 1876 upon its first presentation at the Salon where it was exhibited with several other of Moreau's works. The following year Gauchez sent it to be exhibited at London's Grosvenor Gallery where it hung not with the aquarelles in a separate room but in the main East Gallery with the oil paintings. Currently it is located in the Musée d'Orsay.