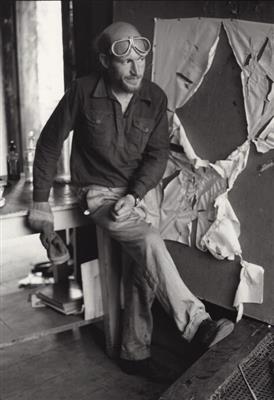 Gustav Metzger (10 April 1926 – 1 March 2017) was an artist and political activist who developed the concept of Auto-Destructive Art and the Art Strike. Together with John Sharkey, he initiated the Destruction in Art Symposium in 1966.

Metzger was recognised for his protests in the political and artistic realms.

Metzger was born to Polish Jewish parents in Nuremberg, Germany, in 1926 and came to Britain in 1939 as a refugee under the auspices of the Refugee Children Movement. He was stateless since the late 1940s. He received a grant from the UK Jewish community to study at the Royal Academy of Fine Arts in Antwerp between 1948 and 1949. It is with an experience of twentieth century society's destructive capabilities that led Metzger to a concentrated 'formulation of what destruction is and what it might be in relation to art.'

His experience of twentieth century society's destructive capabilities led Metzger to a concentrated 'formulation of what destruction is and what it might be in relation to art.' He was known as a leading exponent of the Auto-Destructive Art and the Art Strike movements. He was also active in the Committee of 100 - a 'named' member

In 1959, Metzger published the first auto-destructive manifesto Auto-Destructive Art. This was given as a lecture to the Architectural Association School of Architecture (AA) in 1964, which was taken over by students as an artistic 'Happening'. The Architectural Association published, in 2015, a facsimile edition of Metzger's lecture transcript. In 1962 he participated in the Festival of Misfits organised by members of the Fluxus group, at Gallery One, London. Guitarist Pete Townshend from The Who studied with Metzger, and during the 1960s, Metzger's work was projected on screens at The Who concerts.

In 2005, he selected EASTinternational which he proclaimed to be "The art exhibition without the art."

Throughout the 60 years that Metzger produced politically engaged works, he incorporated materials ranging from trash to old newspapers, liquid crystals to industrial materials, and even acid."

From 29 September to 8 November 2009, the Serpentine Gallery featured the most extensive exhibition in the UK of his work. Exhibits included the installation Flailing Trees, 15 upturned willow trees embedded in a block of concrete, symbolising a world turned upside down by global warming. He felt that artists are especially threatened, because so many rely on nature as a big inspiration. Metzger stated that "artists have a special part to play in opposing extinction, if only on a theoretical, intellectual basis."

This was originally made in 1960 and remade as Recreation of First Public Demonstration of Auto-Destructive Art in 2004.

Liquid Crystal Environment was originally made in 1965 and remade in 2005.

This ongoing series of work consists of enlarged press photographs of catastrophic events of the 20th century presented to the viewer using confrontational and experiential methods.

This was a recreation of the original demonstration made in 1960. An integral piece of the installation at the Tate Britain, a bag containing rubbish, was erroneously disposed by a cleaner on 30 June 2004. Metzger declared the piece ruined and created a new bag as a replacement.