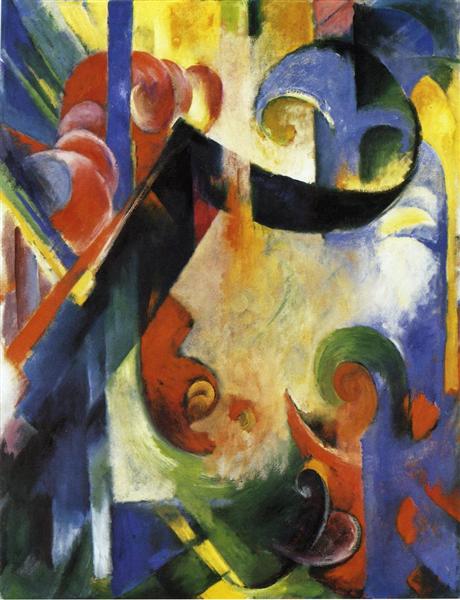 Broken Forms was one of Marc’s last paintings created in 1914 before he left for the war. This year, he created some of his best-known animal paintings, as well as several abstract paintings, including Broken Forms. The abstract paintings signified a stylistic and artistic development for Marc. It was a significant transition from works, like Blue Horse I (1911) and Tiger (1912), which preserved a strong connection to the natural world. Marc’s contemporaries, such as friend and fellow member of The Blue Rider, Wassily Kandinsky, already adopted an abstract style in paintings like Composition IV (1911) and Painting with a green center (1913).

Marc began to show signs of moving towards an abstract style in an earlier painting, Stables (1913). Here, Marc made significant steps toward abstraction while still keeping the animal subject matter. He created an interplay between the horse’s rumps, and the diamond and rectangular shapes. The round shapes at the bottom and the color scheme remind of Robert Delaunay’s work, Simultaneous Contrasts: Sun and Moon (1913, dated on painting 1912). Marc became familiar with Delaunay’s work in 1911 and visited his studio in Paris in October 1912. Another significant step in his gradual shift toward abstraction is the painting Forms in Play (1914). The format of Forms in Play is similar to Stables, and its structure consists of three parts. Like Kandinsky, who at times left traces of landscape in his paintings, Marc left in Forms in Play some shapes which suggest plants and wildlife. In comparison to Forms in Play, Broken Forms is closer to pure abstraction as it has no connection to the physical world.

One of Marc’s goals was to create art that expressed the yearning for a whole existence that did not rely on sensory perception. He viewed sensory perception as deceptive and wished to show the spiritual life behind everything. It was the guiding principle for Marc’s aesthetic, which led him to develop his color symbolism and select animals as his primary subject matter. Marc found that animals possessed innocence and spirituality that humans no longer had, and therefore were the most suitable subjects for his art. By moving towards abstraction in Broken Forms, Marc probably realized that this style would bring him closer to his aim of showing the spirituality and essence of things. The origin of the title is unknown, but the wording is quite similar to the other titles of abstract paintings that Marc created in the same year, like Fighting Forms (1914), Forms at Play, and Cheerful Forms (1914) (Cheerful Forms was destroyed during World War II). The idea of ‘brokenness’ comes most clearly in the black angular shape that dominates the center of the canvas. At the same time, Marc created a penetrating effect with vertical rays that break the solid colors of the forms. Today, the painting is part of the Guggenheim collection in New York.