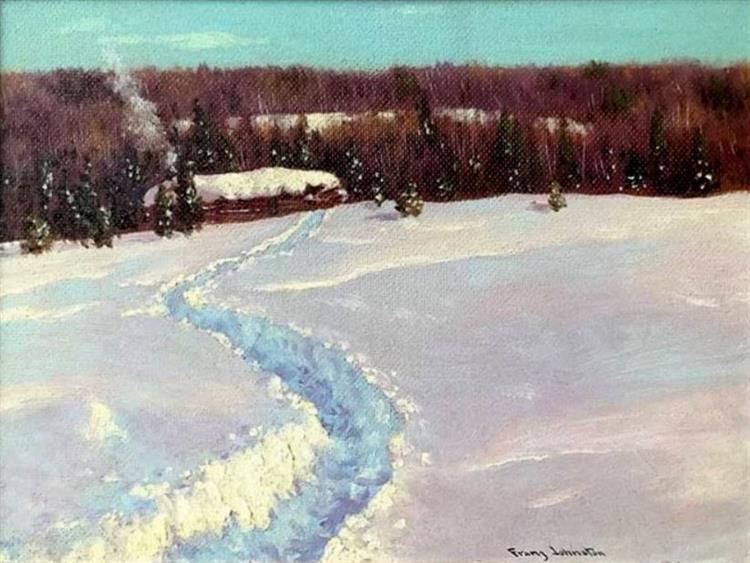 I’m hoping to find a benevolent benefactor who will help me. I wish to sell a Group of Seven painting that’s very dear to me to invest in a community.

The painting is ‘Trapper’s Cabin (North Bay area)’ painted by historically significant Canadian Group of Seven artist Franz Johnston. He created it when travelling to Northern Ontario during the 1930’s and 1940’s. My Uncle William B. Bate bought the painting and displayed it prominently in his home overlooking the Rosedale Golf course in Toronto. William Bradnee Bate founded Bate Chemical and manufactured resins, house paint, glue and wood preservative in the lower Don Valley just off the Don Valley Parkway. Commuters used to see the large brick chimney with his name on it. Part of his old factory now forms the Metro Toronto Police Services Dog Academy; the rest is now parkland.

Why do I want to sell this painting? I don’t. As I said, it’s very dear to me as it reminds me of my Aunt Jean and Uncle William, two very kind people who where very important to me. The painting is also peice of Canada, and it reminds me of home.
But something has come up that’s much more important, and is the reason for this appeal.

The United Church is selling the church and community center that formed the focal point of my home town. I wish to buy it, form a non profit association, and continue to provide the church and the hall to the surrounding community.

The Carnarvon Zion United church, built 130 years ago by pioneering hands with local materials, formed the nucleus of the area. Many weddings, funerals and wakes, prayers, celebrations, happened there and hopes and dreams began inside its walls. I’m not being overly dramatic here, this place helped form the belief system and morals for some major figures, ones that become Canadian and world leaders, financial executives, inventors, developers and one who became Executive Secretary of United Nations.

It's been the jubilant epicenter of many a function: Town halls, community meetings, food drives and fund raisers. The Strawberry Socials, the pancake breakfasts and the Easter, Thanksgiving and Christmas dinners. The Cub Scout, Scout, Brownie, and Guide weekly meetings as early as 1947. The place for planning and for protest. This place has seen it all and the place is filled with over a century of laughter sorrow and joy.

It solidified the community.

It has also been solace of many good and humble men and woman - this place is a significant part of their lives and they lovingly maintained it cared for it - it’s been much more than just a church.

This is where I need a caring benefactor.

I would come to you hat in hand but I have something to offer: a valuable painting. I would like to sell the Franz Johnston for $350,000.00. I know I may or may not get this amount at auction. The funds would be enough to allow me to buy the church, make any necessary repairs and renovations and set up the association to promote and provide for community use.

About me: I grew up in in the Haliburton Highlands, I trained in design and photography before joining the RCMP in 1990 posted to Richmond. In 1999 I attended Capilano University to begin a new career in animation games and app development. I have worked at Electronic Arts, Sony, and Microsoft. I now work in animation, photography. http://icehound.net/