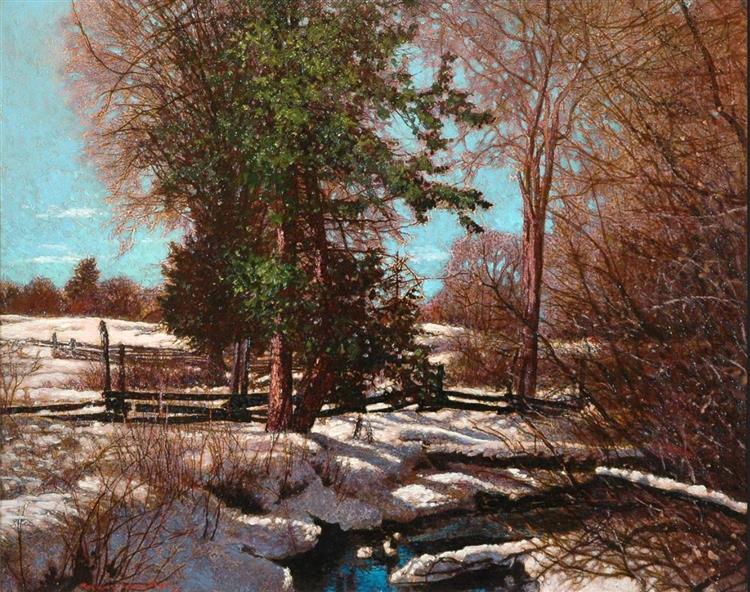 About the Artist: Frank (Franz) Hans Johnston was born on June 19, 1888 in Toronto. Like many other Group of Seven members, he joined Grip Engraving Co. as a commercial artist. He studied art in Germany from 1904 to 1907. In 1910, he left for the United States where he studied art in Philadelphia and worked in commercial design in New York. Although his official association with the Group of Seven was brief, his friendship with the artists dated back over a much longer period. He did take part in the Group's first exhibition of 1920, but by 1921 he had left Toronto to become Principal at the Winnipeg School of Art. In the earlier years of their friendship, Johnston had joined MacDonald and Harris on their journeys to Algoma. His paintings from those years express a strong decorative interpretation of the landscape. In 1927, Johnston changed his name to the more exotic title of `Franz' Johnston and was made a member of the Royal Canadian Academy of Arts. He was also a member of the Ontario Society of Artists, and the Canadian Society of Painters in Watercolor. He painted over 250 paintings in his entire career.
Johnston's rate of production was such that in the 1919 Algoma show he contributed sixty works - more than any other artist. A few months later, he extended his independence even more, having a large one-man show of 200 paintings at the T. Eaton Company Galleries.
He had been slowly moving away from the Group movement. In 1924, he announced his official resignation, claiming that he had no disagreement with the group, only that he wanted to go his own way with regards to exhibitions.
Johnston's style became increasingly realistic throughout his life, revealing a particular fascination for the qualities of light reflected from snow. This theme recurred in later works, in large narrative paintings of the 1930’s and 1940’s as well as more intimate examinations of a river valley, the bright blue of the water bending between snow-laden banks.
He died in Toronto in 1949 and was buried with his fellow artists at McMichael Canadian Art Collection in Kleinburg, Ontario.