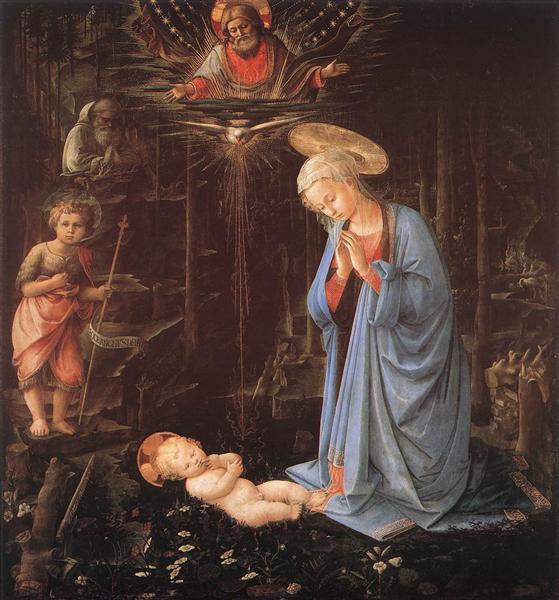 The Adoration of the Infant Jesus

Adoration in the Forest is a painting completed before 1459 by the Carmelite friar, Filippo Lippi, of the Virgin Mary and the newly born Christ Child lying on the ground, in the unusual setting of a steep, dark, wooded wilderness. There are no shepherds, kings, ox, ass – there is no Joseph. "Lippi removes a whole range of narrative details which would have been present in a standard Nativity - he creates a whole set of mysteries, and then preserves them." It was painted for one of the wealthiest men in Renaissance Florence, the banker Cosimo de Medici. In later times it had a turbulent history. Hitler ordered it to be hidden in WW2 and it became part of the story of a mutiny in the U.S. Army - 'the only known case in the whole Second World War of American officers refusing an order.' It is now once again in the Gemäldegalerie, Berlin.

Florence in the 1440s was at an expansive moment in its history. A lot of money was going into building, including the future home of Lippi's Adoration, Cosimo de Medici's Palazzo Medici. Cosimo was the wealthiest man in Florence, a man of power, an adept Italian politician and his home spoke of an attitude of powerful confidence. Yet, in private, he was also a troubled man. He had led a sinful life, had fathered a bastard child on a slave girl, and grown rich by lending money and charging interest – usury – a practice to be punished by an eternity in Hell. Tim Parks: " He was a genuinely religious man, concerned about his soul, and that was a rather large problem for a banker." He set about making amends for his sins in building and art. "Inside his new palace, the first domestic chapel built in all of Italy, as a peace offering to God; a place for Cosimo to kneel and do penance. The walls were decorated with extravagant frescoes, including a portrait of Cosimo himself. But the heart of the room would be the altarpiece - this would be a Nativity, but of a kind never seen before, one that would echo Cosimo's very deepest hopes and fears. " He chose an artist famous not just for his art, but one whose eye for beauty extended beyond pictures, to women, with scandalous results; - a Carmelite friar - Fra Filippo Lippi. Born in Florence around 1406, Lippi's father was a butcher, and the family home on the south bank of the Arno River. By the age of 8 Lippi was an orphan, and placed into the care of the local convent, Santa Maria del Carmine, which towered over the neighbourhood. So Lippi had not chosen to become a monk, but was to be trained to be one. It was a fortunate home for a youngster of an artistic bent; in the 1420s a chapel there was being decorated - 'and the result was one of the most groundbreaking and beautiful works of the Italian Renaissance.