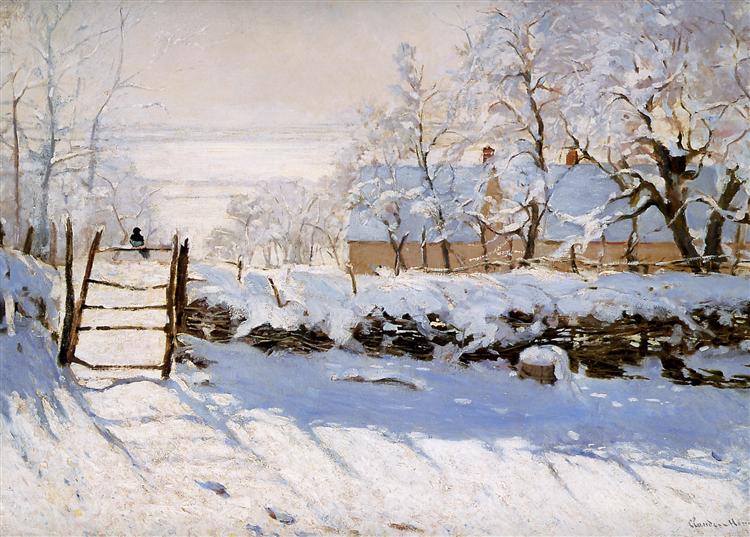 The Magpie (French: La Pie) is an oil-on-canvas landscape painting by the French Impressionist Claude Monet, created during the winter of 1868–1869 near the commune of Étretat in Normandy. Monet's patron, Louis Joachim Gaudibert, helped arrange a house in Étretat for Monet's girlfriend Camille Doncieux and their newborn son, allowing Monet to paint in relative comfort, surrounded by his family.

Between 1867 and 1893, Monet and fellow Impressionists Alfred Sisley and Camille Pissarro painted hundreds of landscapes illustrating the natural effect of snow (effet de neige). Similar winter paintings were produced by Pierre-Auguste Renoir, Gustave Caillebotte, and Paul Gauguin. Art historians believe that a series of severe winters in France contributed to an increase in the number of winter landscapes produced by Impressionists.

The Magpie is one of approximately 140 snowscapes produced by Monet. His first snowscape, A Cart on the Snowy Road at Honfleur, was painted sometime in either 1865 or 1867, followed by a notable series of snowscapes in the same year, beginning with the Road by Saint-Simeon Farm in Winter. The Magpie was completed in 1869 and is Monet's largest winter painting. It was followed by The Red Cape (1869–1871), the only known winter painting featuring Camille Doncieux.

The canvas of The Magpie depicts a solitary black magpie perched on a gate formed in a wattle fence, as the light of the sun shines upon freshly fallen snow creating blue shadows. The painting features one of the first examples of Monet's use of colored shadows, which would later become associated with the Impressionist movement. Monet and the Impressionists used colored shadows to represent the actual, changing conditions of light and shadow as seen in nature, challenging the academic convention of painting shadows black. This subjective theory of color perception was introduced to the art world through the works of Johann Wolfgang von Goethe and Michel Eugène Chevreul earlier in the century.

At the time, Monet's innovative use of light and color led to its rejection by the Paris Salon of 1869. Today, art historians classify The Magpie as one of Monet's best snowscape paintings. The painting was privately held until the Musée d'Orsay acquired it in 1984; it is considered one of the most popular paintings in their permanent collection.

In the late 1850s, French landscape painter Eugène Boudin (1824–1898) introduced Monet (1840–1926) to the art of painting en plein air—"in the open air", using natural light. The invention of the collapsible metal paint tube (1841) and portable easel brought painting, formerly confined to studios, into the outdoors. Boudin and Monet spent the summer of 1858 painting nature together. Like Boudin, Monet came to prefer painting outdoors rather than in a studio, the convention of the time. "If I have become a painter," Monet said, "I owe it to Boudin."

The landscape paintings of Dutch painter Johan Barthold Jongkind (1819–1891) influenced both Boudin and Monet and contributed to the development of early Impressionism. After meeting Jongkind in Sainte-Adresse in 1862, Monet began to cultivate an interest in Jongkind's perspective on the changing conditions of the landscape. From Jongkind, Monet learned to substitute optical color for local color. "Complementing the teaching I received from Boudin, Jongkind was from that moment my true master," Monet later reminisced. "It was he who completed the education of my eye". This new way of seeing, a shift from a conceptual to a perceptual approach, formed the basis for Monet's Haystacks (1890-1891), a series of 25 works showing the effects of dynamic atmospheric conditions over time on a single haystack motif.