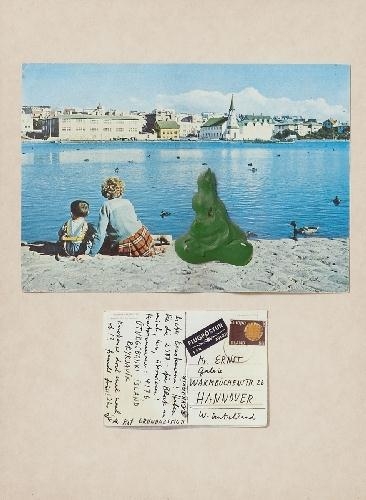 Mail art (also known as postal art and correspondence art) is a populist artistic movement centered on sending small scale works through the postal service. It initially developed out of the Fluxus movement in the 1950s and 60s, though it has since developed into a global movement that continues to the present.

Media commonly used in mail art include postcards, paper, a collage of found or recycled images and objects, rubber stamps, artist-created stamps (called artistamps), and paint, but can also include music, sound art, poetry, or anything that can be put in an envelope and sent via post. Mail art is considered art once it is dispatched. Mail artists regularly call for thematic or topical mail art for use in (often unjuried) exhibition.

Mail artists appreciate interconnection with other artists. The artform promotes an egalitarian way of creating that frequently circumvents official art distribution and approval systems such as the art market, museums, and galleries. Mail artists rely on their alternative "outsider" network as the primary way of sharing their work, rather than being dependent on the ability to locate and secure exhibition space.

Mail art can be seen as anticipating the cyber communities founded on the Internet.

Artist Edward M. Plunkett has argued that communication-as-art-form is an ancient tradition; he posits (tongue in cheek) that mail art began when Cleopatra had herself delivered to Julius Caesar in a rolled-up carpet.

The American artist Ray Johnson is considered to be the first mail artist. Johnson's experiments with art in the mail began in 1943, while the posting of instructions and soliciting of activity from his recipients began in the mid-1950s with the mailing of his "moticos", and thus provided mail art with a blueprint for the free exchange of art via post.

The term "mail art" was coined in the 1960s. In 1962, Plunkett coined the term "New York Correspondence School" to refer to Johnson's activities; Johnson adopted this moniker but sometimes intentionally misspelled it as "correspondance." The deliberate misspelling was characteristic of the playful spirit of the Correspondance School and its actions.

Most of the Correspondance School members are fairly obscure, and the letters they sent, often featuring simple drawings or stickers, often instructed the recipient to perform some fairly simple action. Johnson's work consists primarily of letters, often with the addition of doodles and rubber stamped messages, which he mailed to friends and acquaintances. The Correspondance School was a network of individuals who were artists by virtue of their willingness to play along and appreciate Johnson's sense of humor. One example of the activities of the Correspondance School consisted in calling meetings of fan clubs, such as one devoted to the actress Anna May Wong. Many of Johnson's missives to his network featured a hand drawn version of what became a personal logo or alter-ego, a bunny head.

In a 1968 interview, Johnson explained that he found mailed correspondence interesting because of the limits it puts on the usual back and forth interaction and negotiation that comprises communication between individuals. Correspondence is "a way to convey a message or a kind of idea to someone which is not verbal; it is not a confrontation of two people. It's an object which is opened in privacy, probably, and the message is looked at ... You look at the object and, depending on your degree of interest, it very directly gets across to you what is there ..."