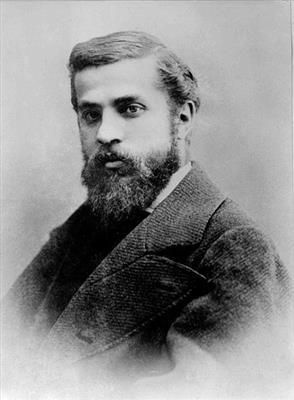 
Antoni Gaudí i Cornet (/ˈɡaʊdi/; Catalan: [ənˈtɔni ɣəwˈði]; 25 June 1852 – 10 June 1926) was a Catalan architect known as the greatest exponent of Catalan Modernism. Gaudí's works have a highly individualized, sui generis style. Most are located in Barcelona, including his main work, the church of the Sagrada Família.


Gaudí's work was influenced by his passions in life: architecture, nature, and religion. He considered every detail of his creations and integrated into his architecture such crafts as ceramics, stained glass, wrought ironwork forging and carpentry. He also introduced new techniques in the treatment of materials, such as trencadís which used waste ceramic pieces.


Under the influence of neo-Gothic art and Oriental techniques, Gaudí became part of the Modernista movement which was reaching its peak in the late 19th and early 20th centuries. His work transcended mainstream Modernisme, culminating in an organic style inspired by natural forms. Gaudí rarely drew detailed plans of his works, instead preferring to create them as three-dimensional scale models and moulding the details as he conceived them.


Gaudí's work enjoys global popularity and continuing admiration and study by architects. His masterpiece, the still-incomplete Sagrada Família, is the most-visited monument in Spain. Between 1984 and 2005, seven of his works were declared World Heritage Sites by UNESCO. Gaudí's Roman Catholic faith intensified during his life and religious images appear in many of his works. This earned him the nickname "God's Architect" and led to calls for his beatification.


Antoni Gaudí was born on 25 June 1852 in Riudoms or Reus, to the coppersmith Francesc Gaudí i Serra (1813–1906) and Antònia Cornet i Bertran (1819–1876). He was the youngest of five children, of whom three survived to adulthood: Rosa (1844–1879), Francesc (1851–1876) and Antoni. Gaudí's family originated in the Auvergne region in southern France. One of his ancestors, Joan Gaudí, a hawker, moved to Catalonia in the 17th century; possible origins of Gaudí's family name include Gaudy or Gaudin.


Gaudí's exact birthplace is unknown because no supporting documents have been found, leading to a controversy about whether he was born in Reus or Riudoms, two neighbouring municipalities of the Baix Camp district. Most of Gaudí's identification documents from both his student and professional years gave Reus as his birthplace. Gaudí stated on various occasions that he was born in Riudoms, his paternal family's village. Gaudí was baptised in the church of Sant Pere Apòstol in Reus the day after his birth under the name "Antoni Plàcid Guillem Gaudí i Cornet".


Gaudí had a deep appreciation for his native land and great pride in his Mediterranean heritage for his art. He believed Mediterranean people to be endowed with creativity, originality and an innate sense for art and design. Gaudí reportedly described this distinction by stating, "We own the image. Fantasy comes from the ghosts. Fantasy is what people in the North own. We are concrete. The image comes from the Mediterranean. Orestes knows his way, where Hamlet is torn apart by his doubts." Time spent outdoors, particularly during summer stays in the Gaudí family home Mas de la Calderera, afforded Gaudí the opportunity to study nature. Gaudí's enjoyment of the natural world led him to join the Centre Excursionista de Catalunya in 1879 at the age of 27. The organisation arranged expeditions to explore Catalonia and southern France, often riding on horseback or walking ten kilometres a day.