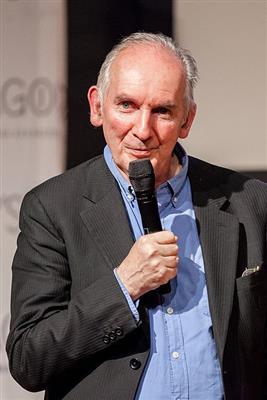 Alan Lee was born and raised in London, where he studied graphic art and design. Enchanted by myth and folklore from an early age, he gravitated toward the field of book illustration — following in the footsteps of Arthur Rackham and Edmund Dulac, master illustrators of the nineteenth century. Alan worked as an illustrator in London until the mid-1970s, when he moved to Dartmoor with fellow-artists Marja Lee Kruyt (to whom he was married for many years) and Brian Froud. At the urging of Ian Ballantine (the legendary American publisher), Alan and Brian created the book Faeries, inspired by the Dartmoor countryside. It went on to become a bestseller, published to acclaim all around the world.
Since that time, Alan has established himself as one of England's preeminent book artists, creating exquisite watercolor paintings for, among other works, The Mabinogion, Castles, Merlin Dreams, and Black Ships Before Troy: The Story of the Illiad (winner of the pretigious Kate Greenaway Award), and for the lavish anniversary edition of J.R.R. Tolkien's The Lord of the Rings.

For the last few years, however, book projects have been set aside while he labors on the New Zealand set of Peter Jackson's film trilogy, The Lord of the Rings. As conceptual designer for the films, it is Alan's job to create the distinctive "look" of Middle Earth. A comparison of the films to Alan's prior illustrations for The Lord of the Rings gives a clear idea just how influential Alan's vision has been to the project. He has also designed for other films, including Legend, Erik the Viking, and Merlin.

When not working on film locations, Alan still makes his home on Dartmoor in southwest England, where his studio takes up two floors of an ancient, rose-covered stone barn. In the same small village as mythic artists Brian & Wendy Froud, William Todd-Jones, Terri Windling, and others. He was one of the founders of the annual Mythic Garden exhibition of outdoor sculpture at the Stone Lane Gardens arboretum; and is involved in the creation of a woodland non denominational spiritual retreat building along with Diana Marriott and the internationally known local sculptor Peter Randall Page. His interests include myth and folklore, literature, poetry, music (particularly jazz, blues, and the singing of June Tabor), archaeology, history, international travel, and long walks through Devon woodland. He has two children, Virginia (also a sculptor) and Owen. Their mother, Marja, from the Netherlands, is a talented painter herself, as well as a Celtic harpist.

Alan Lee (born 20 August 1947) is an English book illustrator and movie conceptual designer. He was born in Middlesex, England, and studied at the Ealing School of Art.


Alan has illustrated dozens of fantasy books, including some nonfiction, and many more covers. Several works by J.R.R. Tolkien are among his most notable interiors: the Tolkien centenary edition of The Lord of the Rings (1992), a 1999 edition of The Hobbit that has been boxed with it, and Narn i Chîn Húrin: The Children of Húrin (2007). The latter, a first edition, is his work most widely held in WorldCat participating libraries.
Other books he has illustrated include Faeries (with Brian Froud), Lavondyss by Robert Holdstock (as well as the cover of an early print of this book), The Mabinogion (two versions), Castles and Tolkien's Ring (both nonfiction by David Day), The Mirrorstone by Michael Palin, The Moon's Revenge by Joan Aiken, and Merlin Dreams by Peter Dickinson.


He has also illustrated retellings of classics for young people. Two were Rosemary Sutcliff's versions of the Iliad and the Odyssey—namely, Black Ships Before Troy (Oxford, 1993) and The Wanderings of Odysseus (Frances Lincoln, 1995). Another was Adrian Mitchell's version of Ovid's Metamorphoses—namely, Shapeshifters (Frances Lincoln, 2009).


Lee did cover paintings for the 1983 Penguin edition of Mervyn Peake's Gormenghast trilogy. He also did the artwork for Alive!, a CD by the Dutch band Omnia, released on 3 August 2007 during the Castlefest festival.


Lee and John Howe were the lead concept artists of Peter Jackson's Lord of the Rings films and were recruited by director Guillermo del Toro in 2008 for continuity of design in the subsequent The Hobbit films, before joining Jackson when he took over the Hobbit films project. Jackson has explained how he originally recruited the reclusive Lee. By courier to Lee's home in the south of England, he sent two of his previous films, Forgotten Silver and Heavenly Creatures, with a note from himself and Fran Walsh that piqued Lee's interest enough to become involved. Lee went on to illustrate and even to help construct many of the scenarios for the movies, including objects and weapons for the actors. He also made two cameo appearances, in the opening sequence of The Fellowship as one of the nine kings of men who became the Nazgûl, and in The Two Towers as a Rohan soldier in the armory (over the shoulder of Viggo Mortensen as Aragorn and Legolas talk in Elvish).


Lee has also worked as a conceptual designer on the films Legend, Erik the Viking, King Kong and the television mini-series Merlin. The art book Faeries, produced in collaboration with Brian Froud, was the basis of a 1981 animated feature of the same name.


Two years after completion of The Lord of the Rings film trilogy, Lee released a 192-page collection of his conceptual artwork for the project, entitled The Lord of the Rings Sketchbook (HarperCollins, 2005). Film director Peter Jackson said, "His art captured what I hoped to capture with the films."