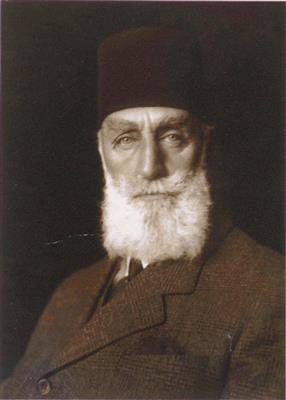 
On 30 May 1868, he was born at Dolmabahçe Palace, Beşiktaş, Istanbul, to then Sultan Abdulaziz and his wife Hayranidil Kadın. He was younger full brother of Nazime Sultan. He was educated privately.


On 3 March 1924, six months after the foundation of the Turkish Republic, the Ottoman Caliphate was abolished and the Ottoman dynasty was deposed and expelled from Turkey.


Abdulmejid was given the title of General in the Ottoman Army, but did not have strong military inclinations. He had a more significant role as Chairman of the Ottoman Artists' Society.


He is considered as one of the most important painters of late period Ottoman art. His paintings of the Harem, showing a modern musical gathering, and of his wife, Şehsuvar Hanım, reading Goethe's novel Faust, express the influence of western Europe in his elite circle. These were displayed at a 1918 exhibition of Ottoman paintings in Vienna. His personal self-portrait can be seen at Istanbul Modern.


Abdulmejid was also an avid collector of butterflies, an activity that he pursued during the last 20 years of his life. His favourite magazine was Revue des deux Mondes.


Abdülmecid's first wife was Şehsuvar Hanım, a Turk. They married on 23 December 1896. She was the mother of Şehzade Ömer Faruk, born in 1898. She died in Paris in 1945, and was buried in Bobigny cemetery. His second wife was Mihrimah Hanım. She died at the Nakkaştepe Palace, on 23 May 1899, and was buried in Nuhkuyusu Mosque, Istanbul.


His third wife was Hayrünissa Hanım, a Circassian. She was childless. His fourth wife was Mehisti Hanım. She was a Circassian-Abkhazian. Her father was Akalsba Hacımaf Bey, and her mother was Safiye Hanım. They married on 16 April 1912. She was the mother of Dürrüşehvar Sultan (who got married to Azam Jah, son of Mir Osman Ali Khan), born in 1914. She died in Middlesex, London in 1964, and was buried in Brookwood cemetery.


The caliph was nominally the supreme religious and political leader of all Muslims across the world, with the main goal to prevent extremism or protect the religion from corruption. In the last session of the budget negotiations on 3 March 1924, Urfa Deputy Sheikh Saffet Efendi and his 53 friends demanded the abolition of the caliphate, arguing it was not necessary anymore. This was approved by majority of the votes and a law was established. With the same law, it was decided to expel all members of the Ottoman dynasty. Mustafa Kemal Atatürk, however, was Muslim, and offered the caliphate to Ahmed Sharif as-Senussi, on the condition that he reside outside Turkey; Senussi declined the offer and confirmed his support for Abdulmejid.