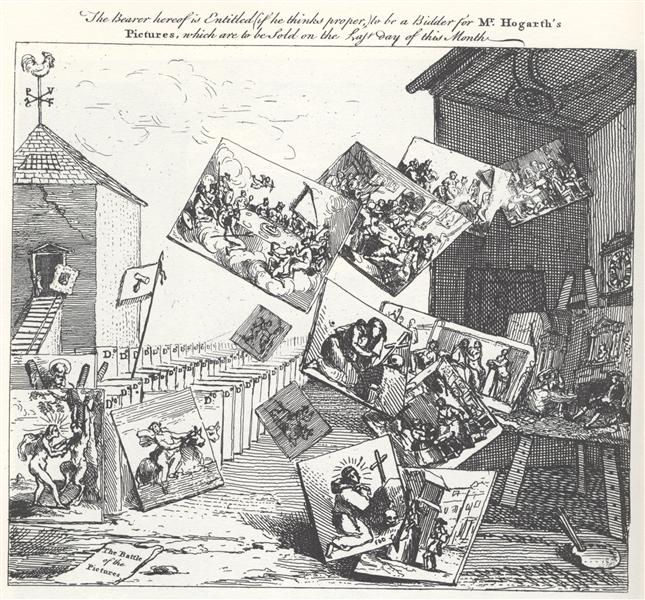 The Battle of the Pictures

"The Battle of the Pictures" was originally engraved by William Hogarth as a bidder's ticket for the auction of his paintings from such sets as A Harlot's Progress, A Rake's Progress and The Four Times of the Day. Like Analysis of Beauty, Characters Caricaturas and Boys Peeping at Nature it represents a statement by Hogarth upon the nature of art and aesthetic values. It also represents a scathing commentary upon the business auction houses, institutions whose ethics are as suspect today as they were in the eighteenth century. The auction house appears to the left. A crack symbolically appears on its front wall. To the side of the main door an over-framed painting rests. To the front of the auction house stand long rows of pictures. The first is original but all the others are copies or fakes.

William Hogarth's studio appears to the right. Appearing on the easel is a painting from "Marriage a la Mode". Other canvases from "The Four Times of the Day" (Morning), "A Harlot's Progress" and "A Rake's Progress" are also apparent. A grouping of old master paintings, such as representations of St. Francis and Mary Magdalene, lead an attack, some stabbing through Hogarth's outnumbered paintings.

In "Time Smoking a Picture" Hogarth attacked the general fashion in England for collecting 'old master' paintings in poor condition or of suspicious quality. In "The Battle of the Pictures" Hogarth is fighting a losing battle against bad art.