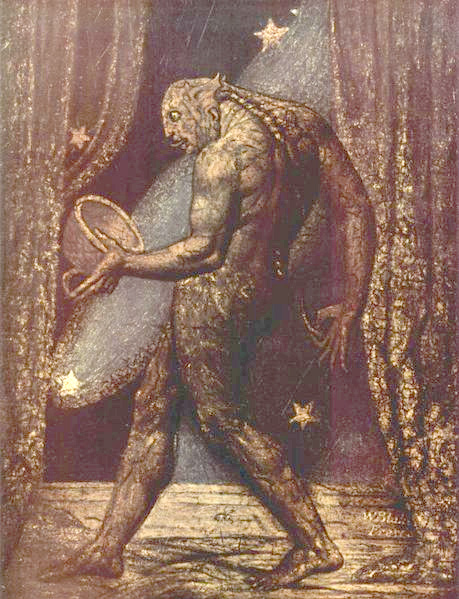 The Ghost of a Flea

The Ghost of a Flea is a miniature painting by the English poet, painter and printmaker William Blake, held in the Tate Gallery, London. Measuring only 8.42 inches × 6.3 inches (21.4 × 16.2 cm), it is executed in a tempera mixture with gold, on a mahogany-type tropical hardwood panel. Completed between 1819 and 1820, it is part of a series of works depicting "Visionary Heads" commissioned by the watercolourist and astrologist John Varley (1788–1842). Fantastic, spiritual art was popular in Britain from around 1770 to 1830, and during this time Blake often worked on unearthly, supernatural panels to amuse and amaze his friends.

At 21.4 cm × 16.2 cm the work is a greatly reduced miniature portrait. Blake generally worked on a small scale; most of his illuminated pages, engravings and many of his paintings are only inches high. Although Ghost of a Flea is one of Blake's smallest works, it is monumental in its imagination. Its tiny scale achieves drama in contrasting the muscular bulk and apparent power of the creature against its incarnation in the panel as an insect.

Blake first met John Varley in the autumn of 1818. Varley was 30 years younger than the artist, and has been described as a "genial 17-stone bear of a man." A student of astrology and zodiacal physiognomy, Varley held a strong belief in the existence of spirits, but was frustrated by his inability to see them. Thus he was drawn to Blake, who claimed to have seen visions daily since when as a small child he had seen a tree "filled with angels, bright angelic wings bespangling every bough like stars." The two would often gather late at night in Varley's house, and played a game in which Varley would attempt to summon the spirit of a historical or mythological person. On the appearance of the spirit, Blake would then attempt to sketch their likeness.

According to Varley, the imagery of a Flea came to Blake during an 1819 séance. Varley described the scene:

Blake's Victorian biographer Alexander Gilchrist (1828–1861) wrote that, three decades earlier in 1790, "Blake, for the only time in his life, saw a ghost... Standing one evening at his garden-door in Lambeth, and chancing to look up, he saw a horrible grim figure, 'scaly, speckled, very awful,' stalking downstairs towards him. More frightened than ever before or after, he took to his heels, and ran out of the house."

Although not directly stated by Gilchrist, there is a close connection between the ghost and the later The Head of the Ghost of a Flea.

Blake often said that he was joined by invisible sitters as he drew them, including, he claimed, a number of angels, Voltaire, Moses and the Flea, who told him that "fleas were inhabited by the souls of such men as were by nature blood thirsty to excess." In his obituary, it was stated that, "The flea communicated to Mr. Blake what passed, as related to himself, at the Creation. 'It was first intended,' said he (the flea) 'to make me as big as a bullock; but then when it was considered from my construction, so armed—and so powerful withal, that in proportion to my bulk, (mischievous as I now am) that I should have been a too mighty destroyer; it was determined to make me—no bigger than I am."