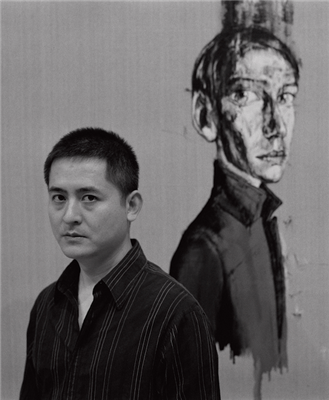 Zeng Fanzhi (Chinese: 曾梵志; born 1964 in Wuhan, Hubei) is a contemporary Chinese artist based in Beijing. From the earliest stages of his career, Zeng Fanzhi's paintings have been marked by their emotional directness, the artist's intuitive psychological sense, and his carefully calibrated expressionistic technique. Moving to Beijing in the early 1990s, Zeng's art displayed an immediate shift, responding to his immersion in a more superficial environment, his seminal Mask series displaying the tensions between the artist's dominant existential concerns and an ironic treatment of the pomposity and posturing inherent to his new contemporary urban life. Throughout, Zeng's expressionistic techniques run counter to such techniques' conventional usage. That is, Zeng's representation of raw, exposed flesh or awkwardly oversized hands is not an attempt at pure emotional expression, but instead play against the superficially composed appearances of his subjects, an ironic treatment of emotional performance as a metaphor for a lost self, of stunted self-realization.

Zeng Fanzhi was born in 1964 in Wuhan, Hubei and lives and works in Beijing. He grew up during the Cultural Revolution, after which he attended Hubei Academy of Fine Arts. There, he was largely influenced by Expressionism. Zeng is one of the most popular artists of his era, in addition to being one of Asia's most financially successful artists. In May 2008, he set a world auction record when one of his contemporary Chinese art pieces "Mask Series 1996 No. 6" was sold for $9.6 million in Hong Kong. Zeng has lived and worked in Beijing since 1993, and has been exhibited all over the globe in venues such as the Shanghai Art Museum, National Art Museum of China, Kunst Museum Bonn, Kunstmuseum Bern, Santa Monica Art Centre, Art Centre, and Le Musée d'Art moderne de la Ville de Paris.

Zeng was in art school from 1987 to 1991, and paid a particular interest in German expressionist painters. During his third year of schooling, he began instead to learn more about the actual approaches that the expressionists would take to painting. By the time his first show came to fruition, it was apparent that he had gained his very own style and the work gained him a large amount of respect in the Chinese art scene.

From the start, Zeng has been heavily influenced by his physical and emotional circumstances. Zeng's first mature series was his "Hospital Series", inspired by the scenes he witnessed in the local clinic near where he lived. At the same time, as an art student, Zeng studied German Expressionism, and the preponderance of social upheaval and intensely felt emotion, against a backdrop of social upheaval, had resonance in his own life. In his Hospital series, Zeng moved to a theme that included the use of hospital interiors, where he devoted much of the detail to the patients' moods and the power that certain brush stroking techniques could yield. These paintings often hinted at a sadomasochistic relationship in the world with his pale colors and blood colored flesh of the patients. In using these techniques, he shows a somewhat pessimistic view of the world. His expressionist technique shined through in these works further with an extreme expression in the eyes of the characters. Also, the hands of the patients are notably oversized and the joints are much larger as well. The scenes he depicts seem to show patients caught up in seeming hysteria, and the deep red colors show anger of sorts.