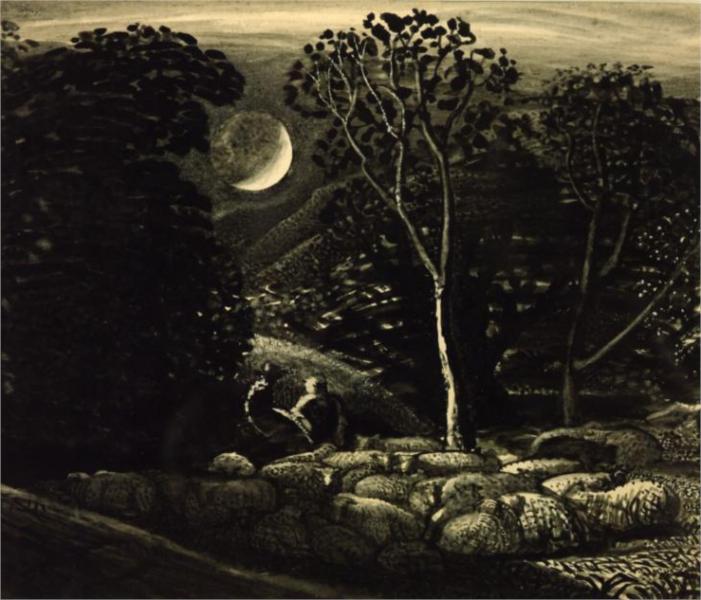 Moonlight, a Landscape with Sheep

Palmer was fascinated by the atmospheric effects that could be achieved in black and white. In the early 1830s, while living in Shoreham, Kent, he produced a series of monochrome works in pen and ink. This is one of his more poetic works, featuring shepherds tending their sleeping flocks of sheep by moonlight. When the picture was later engraved, it was accompanied by these lines from John Milton's Comus (1637):
Evening late, by then the chewing flocks
Had ta'en their suppers of the savouring herb
Of knot-grass dew-besprent
Palmer's work at Shoreham is intensely personal, but has a mystical, even visionary quality comparable to that of William Blake (1757-1827). He was part of a circle of artists, followers of Blake and known as the 'Ancients', including George Richmond (1809-96), Edward Calvert (1799-1883) and Francis Oliver Finch (1802-62). They shunned the contemporary world and retired into a world of music, nostalgia and dreams. The Ancients would stroll together in the countryside by night, gazing at the stars, and were known among the local villagers as 'Extollagers'. The Darent valley appeared to Palmer a perfect, neo-Platonic world and he called it the 'Valley of Vision'. In his pictures he attempted to create an image of pastoral contentment, unaffected by the reality of labour. The characteristic rounded hills of Shoreham, visible in the background of the picture, and the crescent moon were later adopted as motifs by artists of the mid-twentieth century. Often inspired by Milton's poetic evocations, moonlight was a recurring feature in Palmer's work, representing a divine presence in nature.
The Shoreham works are characterised by a deliberate archaism or primitivism. Stylistically they were influenced by the work of such Northern European artists as Breughel, Dürer, Lucas Van Leyden and Giulio Bonasone. They were also partly inspired by Blake's illustrations to Ambrose Philips' imitation of Virgil's First Eclogue (1821). Palmer could have been describing his own work when he wrote of the Blake engravings: 'They are visions of little dells, and nooks, and corners of Paradise; models of the exquisitist pitch of intense poetry…There is in all such a mystic and dreamy glimmer as penetrates and kindles the inmost soul' (A.H. Palmer, The Life and Letters of Samuel Palmer, 1892, pp.15-16).
This work may have been one of a group of what Palmer referred to as 'blacks' which he exhibited at the Royal Academy in 1832.