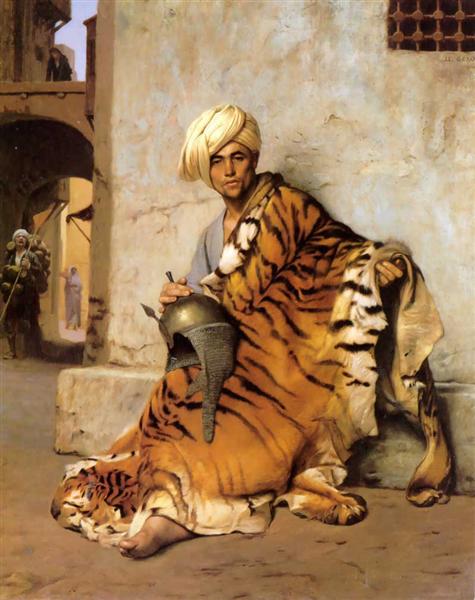 Orientalism disseminated and reinforced a range of stereotypes associated with Eastern cultures most notably regarding a lack of 'civilized' behavior and perceived differences in morality, sexual practices, and character of the inhabitants. This often aligned with propaganda campaigns initiated by Britain and France as colonializing powers and images are best viewed within the context of Europe's political and economic relationships with Eastern countries.

Many Orientalist images are infused with rich colors, particularly oranges, golds and reds (although blue tiles are also prevalent) as well as decorative details and these operated in conjunction with the use of light and shadow to create a sense of dusty heat that Westerners would associate with the prevailing view of the Orient.

Orientalism influenced architecture and design, initially, as Egyptian motifs and designs were incorporated into the French Empire and British Regency styles and Egyptian inspired furniture and interiors became fashionable amongst the upper classes. Egyptian influenced design also featured in public monuments and decorative additions to buildings. While the main architectural style of the period remained Neoclassical, connecting the rising French and British empires to the Roman Republic, Egyptian elements including papyrus columns, window frames that narrowed at the top, and the use of motifs such as the lotus blossom, the head of Hathor, and the sun disc were utilized. Eugène de Beauharnais, Napoleon's adopted son and Arch-Chancellor of the French Empire added an Egyptian portico to his private residence in 1807, and in 1815 Peter Frederick Robinson designed The Egyptian Hall (1815) in London. The style spread throughout Europe and to the United States and can be seen in New York City's prison complex, The Houses of Justice (1838) built in the Egyptian Revival style.

In contrast, The Moorish or Oriental Revival style used pointed or horseshoe arches, ornately patterned trim, Turkish minarets, and Islamic tiles to create fantasy Oriental spaces. A noted example is the Royal Pavilion (1815-1822) in Brighton, UK designed by architect John Nash, which mixes the Islamic architecture of India with elements from the Middle East. Built later, Arab Hall (1866-1895), part of the London home of the artist Frederic Leighton, included over a thousand Islamic tiles from 17th century Damascus, Iznik, and Persia. As art historian Mary Roberts writes, "Arab Hall was conceived as a gesamstkunstwerk, a secular aestheticist fantasy of suspended time in which historic near eastern craft production was synthesized into a harmonious aesthetic present tense".

Maxine du Camp was an early pioneer of travel photography in the Middle East. In 1849 he traveled with his friend, Gustave Flaubert who would later write the famous French novel Madame Bovary (1857), on a trip to Egypt, North Africa, and the Middle East. Du Camp made hundreds of calotype prints focusing on monumental sites and published a number of them in Egypte, Nubie, Palestine, Syrie (1852), the first travel photography book. Another noted photographer was Auguste Salzmann who was commissioned by the Ministry of Public Instruction to study and photograph the noted sites of the Holy Land. He published a selection of his images in Jerusalem: A Study and Photographic Reproduction of the Monuments of the Holy City (1856).

In the 1860s photographers such as Francis Firth and Félix Bonfils began making photographic postcards and mementos for Europeans both at home and traveling in the Middle East. Bonfils, a Frenchman, moved to Beirut where he created images that were meant to convey the Orient's "pristine character and special cachet". Images were often posed and created in the studio, as art historian Michelle L. Woodward wrote, "What makes much of the Bonfils family's work particularly Orientalist was their explicit effort to capture what they imagined was a timeless, unchanging Orient...By selectively and deliberating choosing only particular elements from the surrounding environment...they strove to meet their, and other European's expectations and interests". Local photographers like Pascal Sébah, who established his studio in Istanbul in 1857, also used Orientalist tropes and catered to public demand for Orientalist genre images. Such images also informed the artistic imagination, Jean-Léon Gérôme, for instance, drew upon various photographic works of the Middle East to create his composite paintings. As Nissan N. Perez in his Focus East: Early Photography in the Near East (1839 - 1885), wrote, "Literature, painting, and photography fit the real Orient into the imaginary or mental mold existing in the Westerner's mind. ... These attitudes are mirrored in many of the photographs taken during this time...they became living visual documents to prove an imaginary reality".