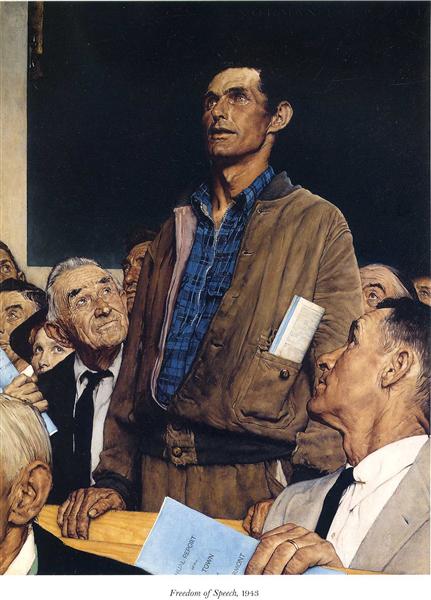 Norman Rockwell Fair Use
last edit: 7 May, 2020 by xennex

Freedom of Speech is the first of the Four Freedoms paintings by Norman Rockwell that were inspired by United States President Franklin D. Roosevelt's State of the Union Address, known as Four Freedoms, which he delivered on January 6, 1941.

Freedom of Speech was published in the February 20, 1943 Issue of The Saturday Evening Post with a matching essay by Booth Tarkington as part of the Four Freedoms series. Rockwell felt that this and Freedom to Worship were the most successful of the set. Since Rockwell liked to depict life as he experienced it or envisioned it, it is not surprising that this image depicts an actual occurrence.

Freedom of Speech was the first of a series of four oil paintings, entitled Four Freedoms, painted by Norman Rockwell. The works were inspired by United States President, Franklin D. Roosevelt in a State of the Union Address, known as Four Freedoms, delivered to the 77th United States Congress on January 6, 1941. Of the Four Freedoms, the only two described in the United States Constitution were freedom of speech and freedom of worship. The Four Freedoms' theme was eventually incorporated into the Atlantic Charter, and it became part of the charter of the United Nations. The series of paintings ran in The Saturday Evening Post accompanied by essays from noted writers on four consecutive weeks: Freedom of Speech (February 20), Freedom of Worship (February 27), Freedom from Want (March 6) and Freedom from Fear (March 13). Eventually, the series became widely distributed in poster form and became instrumental in the U. S. Government War Bond Drive.

Freedom of Speech depicts a scene of a local town meeting in which Jim Edgerton, the lone dissenter to the town selectmen's announced plans to build a new school, was accorded the floor as a matter of protocol. The old school had burned down. Once he envisioned this scene to depict freedom of speech, Rockwell decided to use his Vermont neighbors as models for a Four Freedoms series. The blue-collar speaker wears a plaid shirt and suede jacket. He has dirty hands and a darker complexion than others in attendance. The other attendees are wearing white shirts, ties and jackets. Although one of the men is wearing a wedding band, the speaker is not. Edgerton's youth and workmanlike hands are fashioned with a worn and stained jacket, while the other attendees, appear to be older and more neatly and formally dressed. He is shown "standing tall, his mouth open, his shining eyes transfixed, he speaks his mind, untrammeled and unafraid." Edgerton is depicted in a way that resembles Abraham Lincoln. According to Bruce Cole of The Wall Street Journal, the closest figure in the painting is revealing a subject of the meeting as "a discussion of the town's annual report". According to John Updike, the work is painted without any painterly brushwork. According to Robert Scholes, the work shows audience members in rapt attention with a sort of admiration of this lone speaker.

Rockwell's final work was the result of four restarts and consumed two months. According to Scholes, the subject resembles a Gary Cooper or Jimmy Stewart character in a Frank Capra film. Each version depicted the blue-collar man in casual attire standing up at a town meeting, but each was from a different angle. Earlier versions were troubled by the distraction of multiple subjects and the improper placement and perspective of the subject for the message to be clear. An Arlington, Vermont Rockwell neighbor, Carl Hess, stood as the model for the shy, brave young workman, and another neighbor, Jim Martin, who appeared in each painting in the series, is in the scene. Rockwell's assistant, Gene Pelham, suggested Hess, who had a gas station in town and whose children went to school with the Rockwell children. According to Pelham, Hess "had a noble head". Others in the work were Hess' father Henry (left ear only), Jim Martin (lower right corner), Harry Brown (right — top of head and eye only), Robert Benedict, Sr. and Rose Hoyt to the left. Rockwell's own eye is also visible along the left edge. Hess was married at the time and Henry Hess was a German immigrant. Pelham was the owner of the suede jacket. Hess posed for Rockwell eight different times for this work and all other models posed for Rockwell individually.