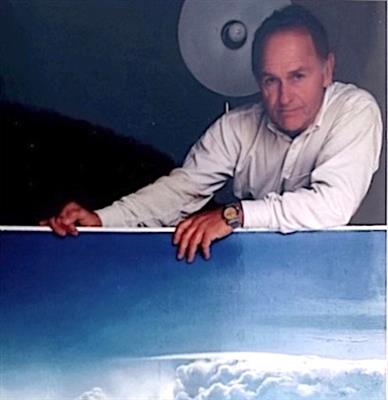 Michael Johnson was born in Thirsk, North Yorkshire, and studied at York College of Art. After working in various studios in Leeds and London, he went freelance in 1960 and since then has worked on books, magazines and advertising for German, French, Swedish and American companies as well as designing cars, gliders and bicycles.
From 2000 to 2005 worked with Sir Norman Foster on a book entitled Aeroplane (following a Corbusier concept of 1925).
In recent years there have been a number of solo and group exhibitions of his work in London, Paris, Dusseldorf, Frankfurt and Hamburg. Large exhibition in Marseille in 2013 (when Marseille became the capital of European culture) as well as various other expos in the consulate of Tunisia in Marseille. Over the last few years travelled through North Africa, from Libya to Morocco producing drawings and paintings for a limited edition books.
Among his books are Angela's Rainbow (1983), Fantastic Paper Gliders (1987) and Berengaria (1995).
Johnson is one of the founding members of the original Association of Illustrators. He now lives and works in the South of France.