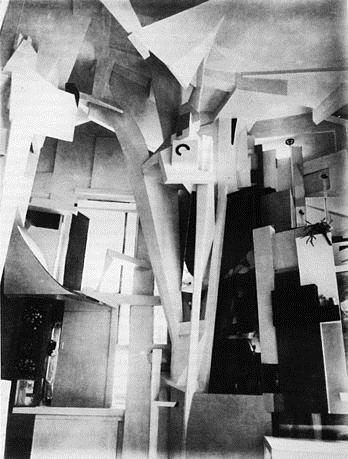 Schwitters dramatically altered the interiors of a number of spaces throughout his life. The most famous was The Merzbau, the transformation of six (or possibly more) rooms of the family house in Hannover, Waldhausenstrasse 5. This took place very gradually; work started in about 1923, the first room was finished in 1933, and Schwitters subsequently extended the Merzbau to other areas of the house until he fled to Norway in early 1937. Most of the house was let to tenants, so that the final extent of the Merzbau was less than is normally assumed. On the evidence of Schwitters' correspondence, by 1937 it had spread to two rooms of his parents' apartment on the ground floor, the adjoining balcony, the space below the balcony, one or two rooms of the attic and possibly part of the cellar. In 1943 it was destroyed in a bombing raid.

Early photos show the Merzbau with a grotto-like surface and various columns and sculptures, possibly referring to similar pieces by Dadaists, including the Great Plasto-Dio-Dada-Drama by Johannes Baader, shown at the first International Dada Fair, Berlin, 1920. Work by Hannah Höch, Raoul Hausmann and Sophie Tauber, amongst others, were incorporated into the fabric of the installation. By 1933, it had been transformed into a sculptural environment, and three photos from this year show a series of angled surfaces aggressively protruding into a room painted largely in white, with a series of tableaux spread across the surfaces. In his essay 'Ich und meine Ziele' in Merz 21, Schwitters referred to the first column of his work as the Cathedral Of Erotic Misery. There is no evidence that he used this name after 1930, however. The first use of the word 'Merzbau' occurs in 1933.

Photos of the Merzbau were reproduced in the journal of the Paris-based group abstraction-création in 1933-4, and were exhibited in MoMA in New York in late 1936.