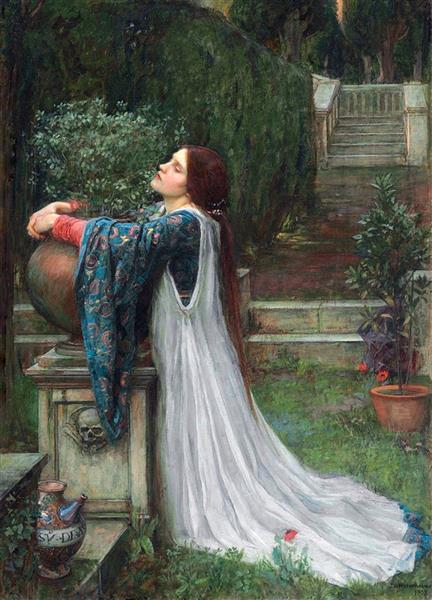 Isabella and the Pot of Basil

Isabella and the Pot of Basil (1907) is an example of the mature work Waterhouse produced in the first decade of the 20th century. The painting is based on a Romantic tale included in The Decameron, a collection of novellas by 14th century Florentine poet Giovanni Boccaccio. Later, the story was adapted by the English Romantic poet John Keats in the 1820 poem Isabella, or The Pot of Basil. According to the story, a Florentine maiden named Isabella falls in love with Lorenzo, who works for her two merchant brothers. Upon realizing this, her brothers, who wanted her to marry a high-ranking nobleman, decide to murder Lorenzo and bury his body in the forest. Lorenzo appears to Isabella in a vision and tells her the location of his corpse. After this, Isabella exhumed his head and hid it in a pot of basil. The plant grew rapidly as it was nourished by the water of Isabella’s tears. Eventually, Isabella’s brothers discover her secret and they steal the pot away. Without the plant, Isabella withers away and dies of overwhelming grief.

Waterhouse depicts Isabella kneeling on the grass in front of the pot of basil in a Renaissance style garden with lush and leafy foliage. The artist suggests the melancholy of the scene by decorating the pot’s pedestal with an ominous skull. Isabella’s kneeling pose was utilized by the artist in the earlier painting Mariana in the South (1897), which is based on a poem by Alfred Tennyson about a Renaissance maiden abandoned by her lover. In both instances, Waterhouse used the same model, who makes recurring appearances in his work from the 1890s. In Isabella and the Pot of Basil, she appears with her long flowing red hear, rosy cheeks but also puffy eyes that are reddened from crying. The story of Isabella was also popular with earlier generations of Pre-Raphaelite artists such as William Holman Hunt’s Isabella and the Pot of Basil(1868) and John Everett Millais’s Isabella (1848-1849). Waterhouse’s Isabella and the Pot of Basil bears most similarities to Hunt’s version. In both cases, the composition focuses on Isabella embracing the pot of basil, however, unlike Waterhouse’s painting, Hunt’s version is set indoors.

Waterhouse drew inspiration for his paintings in classical literature, as well as in poetry by Tennyson and Keats. Around the time he painted Isabella and the Pot of Basil, Waterhouse also produced Phyllis and Demophoon (1905) and Apollo and Daphne (1908) – two stories from Ovid’s Metamorphoses. Like the story of Isabella, the stories from Metamorphoses highlight human transformation into a natural form: Phyllis’s spirit takes the form of an almond tree, while Daphne transforms into a laurel tree. These stories represent the passage from death to eternal life, which results from circumstances of fierce passion and violence. The paintings not only demonstrate Waterhouse’s profound knowledge of classic and romantic sources, but also his concerns with themes of desire, death, regeneration, and immortality.