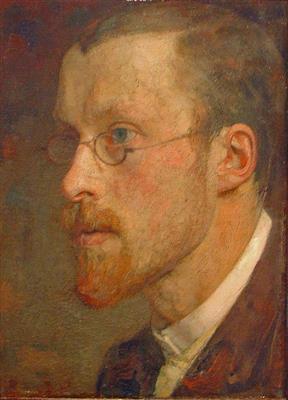 Jan Pieter Veth (18 May 1864, Dordrecht – 1 July 1925, Amsterdam) was a Dutch painter, poet, art critic and university lecturer. He is especially noted as a portrait painter. Amongst his sitters were Max Liebermann, Lambertus Zijl, Frank van der Goes, Antoon Derkinderen and other contemporaries including various fellow painters.

Jan Veth was the son of Gerradus Huibert Veth, a Dordrecht iron merchant and liberal politician, and Anna Cornelia Giltay. On his mother's side he descended from the Dordrecht painter family of Van Strij (his mother was a granddaughter of Jacob van Strij). He married Anna Dorothea Dirks on 10 August 1888, from which marriage came five children.

Veth received his art education at the Rijksakademie voor Beeldende Kunsten in Amsterdam. With several of his fellow students he founded the St. Luke group. From 1885 he worked with the painter Anton Mauve in Laren. After his marriage in 1888 he settled in Bussum. In addition he was a well-known poet, belonging to the Eighties movement and publishing work in the De Nieuwe Gids. He designed the cover for "De Kleine Johannes", a book written by his friend, Frederik van Eeden, contributing to the development of book-art in the Netherlands. As Professor Extraordinary in History of Art and Aesthetics, he was associated with the Rijksakademie voor Beeldende Kunsten in Amsterdam.

Veth was member of the Royal Netherlands Academy of Arts and Sciences since 1923.