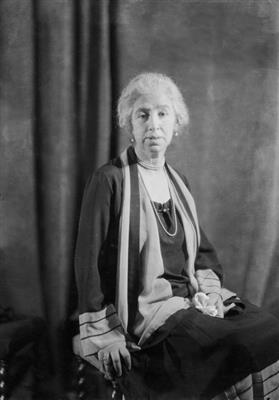 Hanna Hirsch was a daughter of music publisher Abraham Hirsch. She was a friend of Eva Bonnier, and they followed each other through the painting school of August Malmström, and the Royal Swedish Academy of Arts in Stockholm. Hanna Hirsch studied in Paris from 1885 until 1887 at the Academie Colarossi, and shared a studio with Bonnier for part of that time. While working in Paris, she formed a number of close friendships with other women artists from the Nordic countries. She had her portrait of the Finnish sculptor Venny Soldan (now in the Gothenburg Art Museum) accepted to the Paris Salon in 1887. The portrait is realistic and unconventional for its time in portraying a female artist at work (sitting on the floor with clay in her hands) rather than in proper bourgeois attire. The casual informality of Soldan's expression and pose were "interpreted as reflecting the liberated lifestyle of Nordic women in Paris at the time"and the portrait was also considered indecent and denounced at bohemian.

Pauli described the portrait: "We had no major debts at the time. The studio was extremely cold and damp; my Finnish friend had to sit wearing a muff when I painted her. In the bedroom the damp ran down the walls, and there was only a small skylight in the roof. The material side of life troubled us very little at all … Moreover, my friend and I almost always plodded around in slippers; it saved so on shoe-leather and it was so very comfortable."

Pauli received a third class medal for her work at the 1889 Exposition Universelle in Paris.

As was the case with most other Swedish artists of her generation, her painting stood closer to the French juste milieu painters than to most impressionists; nevertheless, the thickly applied paint she used to show specks of light on the white table cloth on her 1887 painting Frukostdags (Breakfast time) (in Nationalmuseum, Stockholm) provoked one critic to comment that she had probably used the cloth to clean her brushes.

In 1887 she married the painter Georg Pauli and travelled with him to Italy for a year.

Her lifetime production was sparse and mostly consisting of portraits, painting artists and writers from her and her husband's circle of friends, such as the one of painter Karl Nordström (1890; in the Bonnier portrait collection, Nedre Manilla, Stockholm), writer Verner von Heidenstam as Hans Alienus (one of his literary characters, 1896), writer Selma Lagerlöf (1932, Nationalmuseum) and the group portrait Vänner ("Friends", 1907, Nationalmuseum) showing writer Ellen Key reading to a group in the home of the Pauli family.