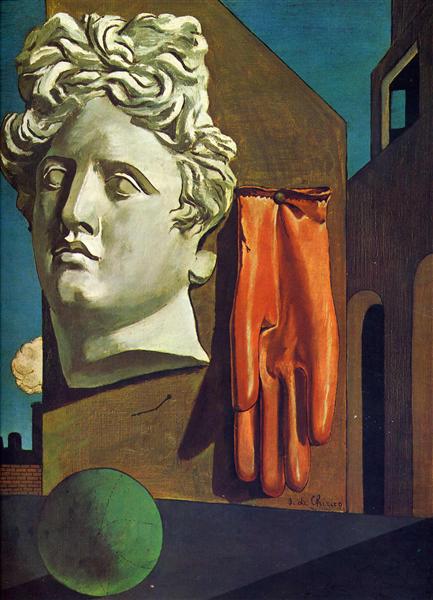 The Song of Love

The Song of Love (also known as Le chant d'amour or Love Song; 1914) is a painting by the Italian metaphysical painter Giorgio de Chirico. It is one of the most famous works by de Chirico and an early example of the surrealist style, though it was painted ten years before the movement was "founded" by André Breton in 1924.


It depicts an outdoor architectural setting similar to other works by de Chirico at this time. This time however, the main focus is a small wall on which is mounted a Greek sculpted head and a surgeon's glove. Below it is a green ball. On the horizon is the outline of a locomotive, an image that recurs several times during this period of de Chirico's career.


The Metaphysical Art Movement was created by Giorgio De Chirico and Carlo Carrà, who had previously been a Futurist. These paintings would depict Italian city squares that are unnaturally void of people. These city squares would often include a grouping of objects that provide a strange juxtaposition. With these driving elements in his paintings, Giorgio De Chirico created a dreamlike reality that was beyond the physical world. Aspects like the strange grouping of object in The Song of Love is what André Breton and the Surrealists looked up to when organizing their movement. The actual art movement only lasted the six months De Chirico and Carrà worked together, Metaphysical Art is the movement associated with all of De Chirico's work after 1911.


De Chirico presents a bust of a classical sculpture, a rubber ball, and a rubber glove on a canvas in between some buildings with a train passing by in a scene that spurs a sense of confusion. The bust could be a representation of De Chirico's love of classical art and a disappearing age. De Chirico uses the rubber glove as a mold of a hand that implies the void of human presence. The buildings set up a scene that is reminiscent of the cityscapes of De Chirico's past.