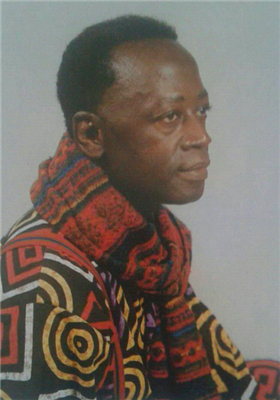 George Ebrin Adingra studied philosophy in Abidjan till the age of 17, when he received a scholarship for the Academy of Fine Arts (École des Beaux-Arts) in Marseille (France), which he attended for three years and left after graduating with distinction in 1955. This was followed by studies in architecture in Nancy, concluded in 1957, and travels through Europe and America. Adingra won the Laurent Prix de New York awarded by Galerie Duncan and became known through exhibitions in Paris, New York, Amsterdam, Milan, Rotterdam, Abidjan, Kobe, and Malmö. His work was exhibited at Artclub Gallery in Rue de Rivoli, Paris, France, and at Dussard Art Gallery in New York.

Adingra worked in his studio in Paris and often sold his pieces in Place du Tertre (Montmartre). He used acrylics, sand and even tiles glue on a burlap canvas to depict African tribal imagery and mysticism in Cubist style, his themes include the Poro secret society, Calao birds, Kora string instruments, healers and wizards, the Akan, Senufo, and Ashanti people.

Adingra's work was appreciated by the anthropologist Dr. Max Mohl and the businessman and art collector Hans Bogatzke, who became Adingra's patrons. After Bogatzke's death, his heirs sold the entire collection to the Sindika Dokolo Foundation. Adingra died of cancer in Angiers (France) in 2005.