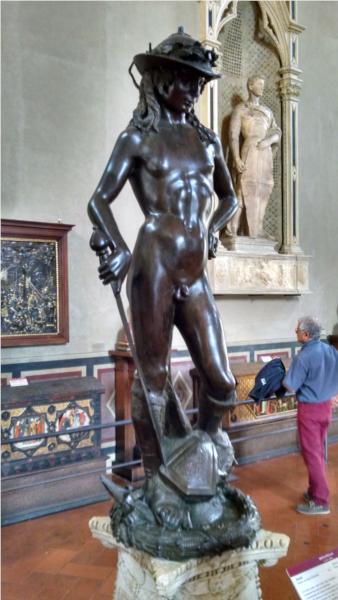 The bronze statue of David (ca. 1440) at the Museo Nazionale del Bargello in Florence is Donatello’s most recognizable and celebrated work. The sculpture refers to the biblical story of the young and untrained David bringing down Goliath, the giant, and the strongest Philistine warrior. David’s triumph, made possible through God’s help, symbolizes good conquering evil. Scholars have vigorously debated many aspects of the statue: its date, original location, and the underlying meaning behind the style and iconography. The suggested dates of creation range from the 1420s to the 1460s; however, most scholars believe the date to be around 1440. The first mention of the statue stated that it was located in the courtyard of the Medici Palace in 1469. Given this, the majority of scholars agree that the sculpture was commissioned by Cosimo de’ Medici for the courtyard of the Medici Palace. Later scholars discovered that the statue was once accompanied by an inscription: “The victor is whoever defends the fatherland. God crushes the wrath of an enormous foe. Behold! A boy overcomes a great tyrant. Conquer, o citizens!”.

Depictions of a triumphant David were rare in 14th-century Italian art. Earlier, Donatello created a marble version of David (1408-1409), which introduced a new approach to the subject, depicting David as a military hero and a slayer of tyrants. This shift was linked to the changing political climate in Florence at the turn of the 15th century, and in 1416 the marble David was placed at the Palazzo della Signoria (today Palazzo Vecchio), the government seat of Florence. Like David defeating Goliath, the rulers of Florence wished to present themselves as liberators that defeated tyranny. It meant that David became a political symbol, associated with the liberation of Florence, and its triumph over political enemies. Even though Donatello’s bronze David is significantly different than his marble David, a precedent existed for using David as a political symbol. The combination of the recently discovered inscription, location of the statue (the most public space in the palace of the family that held political power), and practice of using David as a symbol of political power explains the political significance of Donatello’s bronze David.

However, the bronze David is very distinct in its style and portrayal: he is naked, wearing only a helmet and boots, leaning casually on his sword. Donatello emphasized his youth, giving David a slender figure and an androgynous appearance. These physical attributes seem to be a peculiar choice for a statue associated with the strength of Florentine’s political rule. One way to explain this choice is to examine it in the context of the humanist awakening in Florence during the first half of the 15th century, as well as Donatello’s interest in humanism and antiquity. Texts like Plato’s Symposium describe the idea of ‘platonic love’ through the relationship between an older man and a younger boy. It is possible that Plato’s description of younger boys and their beauty inspired Donatello to create a portrayal of David that expressed the power of ‘platonic love.’ Also, this depiction emphasized the potency of David’s triumph: a young boy that killed a tyrant through divine intervention.