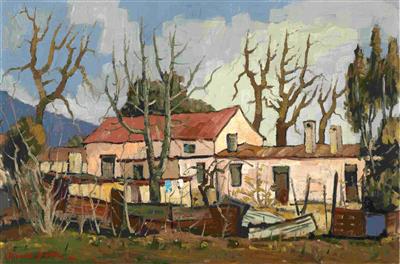 David Botha is considered to be a second generation follower of Cape Impressionism, continuing the stylistic tradition that was established by Naudé, Wenning and Spilhaus.

His most sought after works are his paintings of the typical Cape winter and 'wet street' scenes - usually painted on site in Paarl and Stellenbosch.

These oil paintings are typically filled with white-washed houses and dark, bare oak trees outlined in black and etched against a grey winter sky - a characteristic often adopted by the Cape Impressionists.

Botha was born in Graaff-Reinet in the Eastern Cape in December 1921, and qualified as an art teacher from the Cape Town Teachers Training College in 1941.
His first of fifty solo exhibitions was held in Cape Town.

Both a painter and a graphic artist, David Botha’s subject matter ranges from landscapes and seascapes to still life compositions.

His paintings perpetuate a tradition initiated in the Cape by Pieter Wenning and popularized by Gregoire Boonzaier.

He favoured views of suburban streets, dominated by white-walled houses and accented by the gnarled, bare forms of winter trees. Bothas paintings preserve a record of the typical rural Cape towns and they enjoy extensive patronage, particularly in his home province.