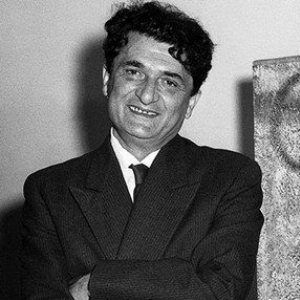 
Bedri Rahmi was born 1911 in Görele on the Black Sea. He was the second child of a family with five. His elder brother, Sabahattin Eyuboglu, was a well-known writer and his younger sister, Mualla Eyüboğlu, was one of the first architects working in restoration. She is well known for her work at the Harem section of Topkapı Palace in Istanbul.


Due to his father's position as a Governor, he lived in various parts of Turkey before attending high school in Trabzon. He moved in 1929 to Istanbul to enter the Academy of Fine Arts in Istanbul.


He left the Academy temporarily in 1931 to study in France with his brother. He learned French in Dijon and later in Lyon. Bedri Rahmi studied then at the Andre Lohte studio in Paris, where he met his future wife, Ernestine Letoni.


Back in Turkey, he completed his studies and obtained his diploma in 1936. In 1937, he entered the Academy as an assistant and translator of Leopold Levy. Eyüpoğlu remained at the Academy until his death in 1975.


His first one-man show was in Bucharest at the Hasefer Gallery in 1935. The exhibition was organized by his future wife Ernestine. They were married in Istanbul in 1936. Bedri Rahmi was a very prolific artist; he painted frescoes at the "Lido restaurant" in Istanbul (1943), a large panel at the Ankara Opera House (1946). He was sent by the government to Edirne in 1938 and to Çorum and Iskilip in 1942. That was a turning point in his painting career.


He worked with mosaics and prepared a panel of 250 m (2,700 sq ft) for the Brussels Fair in 1958, which brought him the first prize award. In 1960, he made a panel for NATO headquarters in Paris. This panel was transferred to the headquarters in Brussels when France left NATO.


Bedri Rahmi belonged to the D Group of painters, and founded the Group of 10 for young painters. Various mosaic panels can be found in Istanbul at hospitals or hotels. He also did a stained glass window composition at the Embassy of Turkey in Bonn, Germany. On a second trip to Paris he was extremely impressed with the Musée de l'Homme's exhibition of African art. This is when he decided to use woodblock printing in order to allow everyone to have access to his work. He simplified his designs, had blocks prepared, and also had his students use this for printing. In 1960 he was invited to the United States on a Rockefeller grant and a Ford Foundation grant. He was also guest professor at the University of California, Berkeley. One of his works is part of the collection of the Modern Art museum. His work can be found in various museums in the USA, Europe and Turkey.


Bedri Rahmi taught at Mimar Sinan University of Fine Arts until his death on 21 September 1975 from pancreatic cancer. He was laid to rest at the Küçükyalı Cemetery in Istanbul.