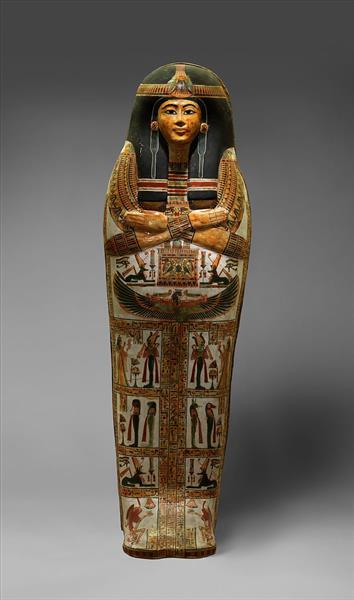 Outer Coffin of the Singer of Amun Re, Henettawy

The Mistress of the House, Singer of Amun-Re, Henettawy died at the young age of twenty-one. She was buried in a plundered tomb, which had originally been the resting place of Minmose, an official of Hatshepsut. The burial was a modest one, including a set of coffins and personal jewelry. Henettawy's body was not embalmed but simply wrapped in layers of linen bandages.
Aside from her rather simple personal jewelry, Henettawy's main burial equipment consisted of two splendid coffins and a mummy board, fitting one into the other like parts of a Russian doll. Both coffins and the innermost lid are shaped like wrapped mummies with elaborate masks fastened over the heads.

The outer coffin lid, intended to resemble a wrapped mummy, wears an elaborate pectoral in the shape of a small shrine within which are two winged wedjat eyes (Eye of Horus), with suspended uraeus cobras holding ankhs. Below these, Horus falcons flank a central scarab that pushes a sun disk upward, an image of the rising sun and of rebirth. The composition is similar to the Middle Kingdom pectoral of SitHathoryunet. At the sides of this pectoral are figures of Anubis, god of mummification, represented as a jackal wearing the crowns of Upper and Lower Egypt and holding empowering scepters.

Beneath the protective wings of Nut, vertical and horizontal yellow bands, representing gold, cover the white mummy wrapping. The hieroglyphs on the center band read: "Recitation by the Osiris, housemistress and chantress of Amun-Re, king of the gods, Henettawy, justified, who says: 'O my mother Nut! Spread your wings over my face and cause me to be like the imperishable stars, like the unwearying stars, without dying a second time in necropolis!'" In the rectangular spaces between the bands, Henettawy in a rich golden garment shakes a sistrum and prays to Osiris (the two uppermost scenes), the four sons of Horus stand behind altars with offerings (middle scenes), and Anubis, god of the cemetery and mummification, holds empowering scepters in the bottom scenes. At the feet, the goddesses Isis (viewers left) and Nephthys (viewers right) mourn Hennetawy's death.