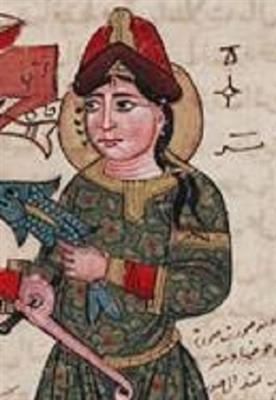 Badīʿ az-Zaman Abu l-ʿIzz ibn Ismāʿīl ibn ar-Razāz al-Jazarī (1136–1206, Arabic: بديع الزمان أَبُ اَلْعِزِ إبْنُ إسْماعِيلِ إبْنُ الرِّزاز الجزري‎, IPA: [ældʒæzæriː]) was a Muslim polymath: a scholar, inventor, mechanical engineer, artisan, artist and mathematician from Jazira in Mesopotamia. He is best known for writing The Book of Knowledge of Ingenious Mechanical Devices (Arabic: كتاب في معرفة الحيل الهندسية‎, romanized: Kitab fi ma'rifat al-hiyal al-handasiya, lit. 'Book in knowledge of engineering tricks') in 1206, where he described 100 mechanical devices, some 80 of which are trick vessels of various kinds, along with instructions on how to construct them. He is credited with the inventions of the flush toilet and the elephant clock.


Al-Jazari was born in the area of Upper Mesopotamia in 1136. Sources state his exact location is unknown, but they speculate he could have been born in Jazirat ibn Umar, where he got the name Jazari from or Al-Jazira which was used to denote Upper Mesopotamia. The only biographical information known about him is contained in his Book of Knowledge of Ingenious Mechanical Devices. Like his father before him, he served as chief engineer at the Artuklu Palace, the residence of the Mardin branch of the Artuqids which ruled across eastern Anatolia as vassals of the Zengid dynasty of Mosul and later of Ayyubid general Saladin.


Al-Jazari was part of a tradition of artisans and was thus more a practical engineer than an inventor who appears to have been "more interested in the craftsmanship necessary to construct the devices than in the technology which lay behind them" and his machines were usually "assembled by trial and error rather than by theoretical calculation". His Book of Knowledge of Ingenious Mechanical Devices appears to have been quite popular as it appears in a large number of manuscript copies, and as he explains repeatedly, he only describes devices he has built himself. According to Mayr, the book's style resembles that of a modern "do-it-yourself" book.


Some of his devices were inspired by earlier devices, such as one of his monumental water clocks, which was based on that of a Pseudo-Archimedes. He also cites the influence of the Banū Mūsā brothers for his fountains, al-Saghani for the design of a candle clock, and Hibatullah ibn al-Husayn (d. 1139) for musical automata. Al-Jazari goes on to describe the improvements he made to the work of his predecessors, and describes a number of devices, techniques and components that are original innovations which do not appear in the works by his precessors.


The most significant aspect of al-Jazari's machines are the mechanisms, components, ideas, methods, and design features which they employ.


A camshaft, a shaft to which cams are attached, was introduced in 1206 by al-Jazari, who employed them in his automata, water clocks (such as the candle clock) and water-raising machines. The cam and camshaft also appeared in European mechanisms from the 14th century.


The eccentrically mounted handle of the rotary quern-stone in fifth century BCE Spain that spread across the Roman Empire constitutes a crank. The earliest evidence of a crank and connecting rod mechanism dates to the 3rd century AD Hierapolis sawmill in the Roman Empire. The crank also appears in the mid-9th century in several of the hydraulic devices described by the Banū Mūsā brothers in their Book of Ingenious Devices.