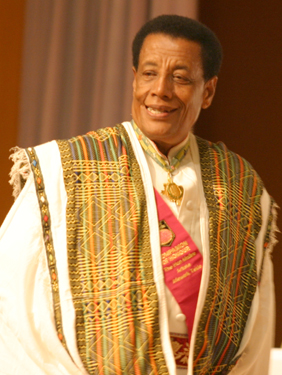 Afewerk Tekle (22 October 1932 – 10 April 2012) was one of Ethiopia's most celebrated artists, particularly known for his paintings on African and Christian themes as well as his stained glass.

Born in Ankober, in Shewa Province, to Feleketch Yamatawork and Tekle Mamo, Afewerk grew up under the Italian occupation during the Second World War. Following the war, in 1947, Afewerk decided that he wanted to help rebuild Ethiopia and elected to travel to England to study mining engineering. Before departing, Afewerk, together with other students leaving to study overseas, was addressed by Emperor Haile Selassie. Afewerk recalls being told "you must work hard, and when you come back do not tell us what tall buildings you saw in Europe, or what wide streets they have, but make sure you return equipped with the skills and the mindset to rebuild Ethiopia".

Afewerk had already shown talent as an artist as a child, decorating several walls in his home town. Whilst at boarding school in England, this talent was recognised and encouraged by his teachers. As a result, Afewerk was persuaded to switch from engineering and enroll in Central School of Arts and Crafts in London. He then went on to the Slade School of Art where he studied painting, sculpture and architecture.

Returning to Ethiopia as a university graduate, Afewerk could have accepted an assigned ministerial post, but instead decided to spend time travelling around the provinces of Ethiopia to get more experience of his native country and culture, which he reflected in his paintings. In 1954 he held his first one-man show in Addis Ababa, at Municipality Hall, that gave him the funds to travel around Europe for two years where he learnt how to design and construct stained glass windows. He also made a special study on Ethiopian illustrated manuscripts in the British Library, the Bibliothèque Nationale in Paris and the Vatican Library.

Back in Ethiopia, Afewerk opened a studio in the National Library of Ethiopia. His growing recognition lead to government commissions for murals and mosaics in St George's Cathedral, Addis Ababa, and several of his designs were used on the national stamps. He was also commissioned to produce sculptures of famous Ethiopians, although only the monumental statue of Ras Makonnen in Harrar was completed. Most notably, in 1958 he designed the stained glass windows in the Africa Hall of the United Nations Economic Commission for Africa in Addis Ababa. The three windows cover an area of 150 square meters, and represent the sorrow of Africa's past, the struggle of the present, and hope for Africa's future.

In 1961 Afewerk held a major retrospective in Addis Ababa, which led to his painting Maskal Flower being shown at international exhibitions in Russia, the United States and Senegal. Increasing funds allowed Afewerk to travel around the continent of Africa. With much of Africa still emerging from colonialism, Afewerk became fired with black emancipation and the struggles for independence. This is reflected in his paintings of this time, with titles like Backbones of African Civilization and African Unity.