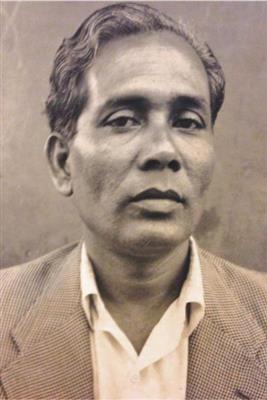 Zainul Abedin was a Bengali painter. His paintings on the Bengal famine of 1943 are viewed as his most characteristic works. His homeland honored him with given the title “Shilpacharjo” (Bengali: শিল্পাচার্য) “Great teacher of the arts" for his artistic and visionary attributes.

Zainul Abedin (29 December 1914 – 28 May 1976) was a Bengali painter. He became well known in 1944 through his Famine Series paintings of 1943. After the partition of India and Pakistan he moved to Pakistan, and when Bangladesh was created in 1971, he was rightly considered by Syed Manzoorul Islam as the founding father of Bangladeshi modern art. In 1948 he helped establish the Institute of Arts and Crafts (now Faculty of Fine Arts) at Dhaka University.

Like many of his contemporaries, his paintings of the 1943 famine are probably his most characteristic work.

Abedin was born in Kishoreganj, East Bengal on 29 December 1914. Much of his childhood was spent near the scenic banks of the Brahmaputra river. The Brahmaputra would later appear in many of his paintings and be a source of inspiration all throughout his career. Many of his works framed Brahmaputra and a series of watercolors that Abedin did as his tribute to the river earned him the Governor's Gold Medal in an all-India exhibition in 1938. This was the first time when he came under spotlight and this award gave Abedin the confidence to create his own visual style.

In 1933, Abedin was admitted to Calcutta Government Art School in Calcutta. Here for five years he learned British/ European academic style and later he joined the faculty of the same school after his graduation. He was the first Muslim student to obtain first class distinction from the school. He was dissatisfied with the oriental style and the limitations of European academic style and this led him towards realism. He was the pioneer of the modern art movement that took place in Bangladesh. In 1948 he, with the help of few of his colleagues, founded an art institute in Dhaka. Back then, there were no art institutes present in Dhaka. It was considered the best art institute in Pakistan during its early years. He worked in the Pakistani government for a while. He taught at the institute and among his students was Pakistani artist Mansur Rahi. He also taught Bangladeshi artist Mohammad Kibria.

After completing his two years of training from an art school in London, he began a new style, the "Bengali style", where the main features were: folk forms with their geometric shapes, sometimes semi-abstract representation, and the use of primary colors. But he lacked the sense of perspective. Later he realized the limitations of folk art, so he went back to the nature, rural life and the daily struggles of man to make art that would be realistic but modern in appearance.

Among all the contemporary works of Abedin, his famine sketches of the 1940s are his most remarkable works. He created his famine painting set, which, when exhibited in 1944, brought him even more critical acclaim. The miserable situation of the starving people during the Great Famine of Bengal in 1943 touched his heart. He made his own ink by burning charcoal and used it on cheap, ordinary packing paper. He depicted those starving people who were dying by the road-side. Abedin not only documented the famine, he also revealed the famine's sinister face through the skeletal figures of people fated to die of starvation.