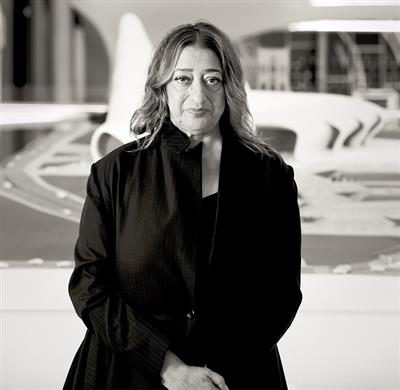 
Dame Zaha Mohammad Hadid DBE RA (Arabic: زها حديد‎ Zahā Ḥadīd; 31 October 1950 – 31 March 2016) was a British Iraqi architect, artist and designer, recognised as a major figure in architecture of the late 20th and early 21st centuries. Born in Baghdad, Iraq, Hadid studied mathematics as an undergraduate and then enrolled at the Architectural Association School of Architecture in 1972. In search of an alternative system to traditional architectural drawing, and influenced by Suprematism and the Russian avant-garde, Hadid adopted painting as a design tool and abstraction as an investigative principle to "reinvestigate the aborted and untested experiments of Modernism [...] to unveil new fields of building."


She was described by The Guardian as the "Queen of the curve", who "liberated architectural geometry, giving it a whole new expressive identity". Her major works include the London Aquatics Centre for the 2012 Olympics, the Broad Art Museum, Rome's MAXXI Museum, and the Guangzhou Opera House. Some of her awards have been presented posthumously, including the statuette for the 2017 Brit Awards. Several of her buildings were still under construction at the time of her death, including the Daxing International Airport in Beijing, and the Al Wakrah Stadium in Qatar, a venue for the 2022 FIFA World Cup.


Hadid was the first woman to receive the Pritzker Architecture Prize, in 2004. She received the UK's most prestigious architectural award, the Stirling Prize, in 2010 and 2011. In 2012, she was made a Dame by Elizabeth II for services to architecture, and in February, 2016, the month preceding her death, she became the first woman to be individually awarded the Royal Gold Medal from the Royal Institute of British Architects (Ray Eames and Sheila O'Donnell had previously been awarded it jointly with Charles Eames and John Tuomey respectively).


Zaha Hadid was born on 31 October 1950 in Baghdad, Iraq, to an upper class Iraqi family. Her father, Muhammad al-Hajj Husayn Hadid, was a wealthy industrialist from Mosul. He co-founded the left-liberal al-Ahali group in 1932, a significant political organisation in the 1930s and 1940s. He was the co-founder of the National Democratic Party in Iraq and served as minister of finance after the overthrow of the monarch after the 1958 Iraqi coup d'état for the government of General Abd al-Karim Qasim. Her mother, Wajiha al-Sabunji, was an artist from Mosul while her brother Foulath Hadid was a writer, accountant and expert on Arab affairs. Hadid once mentioned in an interview how her early childhood trips to the ancient Sumerian cities in southern Iraq sparked her interest in architecture. In the 1960s Hadid attended boarding schools in England and Switzerland.


Hadid studied mathematics at the American University of Beirut before moving, in 1972, to London to study at the Architectural Association School of Architecture. There she studied with Rem Koolhaas, Elia Zenghelis and Bernard Tschumi. Her former professor, Koolhaas, described her at graduation as "a planet in her own orbit." Zenghelis described her as the most outstanding pupil he ever taught. 'We called her the inventor of the 89 degrees. Nothing was ever at 90 degrees. She had spectacular vision. All the buildings were exploding into tiny little pieces." He recalled that she was less interested in details, such as staircases. "The way she drew a staircase you would smash your head against the ceiling, and the space was reducing and reducing, and you would end up in the upper corner of the ceiling. She couldn't care about tiny details. Her mind was on the broader pictures—when it came to the joinery she knew we could fix that later. She was right.' Her AA graduation thesis, Malevich's Tektonik, was a concept and design for a 14-level hotel on London's Hungerford Bridge.executed as an acrylic painting, inspired by the works of the Russian suprematist artist Kazimir Malevich.