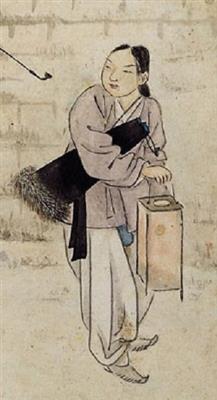 
He is Shin Mal Joo's descendant who was a scholar of the early Joseon Dynasty.


Not much is known about Shin Yun-bok's life. He was the son of royal court painter Hanpyeong (한평; 漢枰), who had participated in painting the royal portraits of Yeongjo and Jeongjo. Hyewon reached the official rank of cheomjeoljesa (첨절제사; 僉節制使) at the Dohwaseo and was adept at different styles of painting; genre, landscape, and animals. It is speculated that he left a great number of paintings due to the popularity of genre paintings during that era.


There are different studies and theories regarding his life, that he may not have ever been a member of the Dohwaseo nor was he on close terms with Kim Hong-do.


Shin Yun-bok, despite being greatly influenced and overshadowed by Kim Hong-do during his career, developed his own unique technique and artistry. Along with Kim Hong-Do, he is known foremost for his genre paintings of the Joseon era. Whereas Kim depicted everyday life of peasants with a humorous touch, Shin showed glimpses of eroticism in his paintings of townspeople and gisaeng. His choice of characters, composition, and painting method differed from Kim's, with use of bright colors and delicate paint strokes. He also painted scenes of shamanism and townlife, offering insight to lifestyle and costumes of the late Joseon era.


His ink landscape paintings used clear light strokes in a method similar to that of Yun Je-hong (윤제홍), the pioneer in new style painting of the late Joseon era. He is also known to not have used the traditional method of leaving empty space in his paintings, usually filling the whole canvas. Although he placed short verse and his seal on most of his paintings, none indicate the date nor time of their creation and it is difficult to define the progression of his painting style. As one of the pillars of genre painting in the Joseon era, he influenced many other painters afterwards.


His album, Hyewon Pungsokhwacheop, contains 30 of his paintings and was designated the 135th National Treasure of South Korea in 1970.


Four paintings from the Pungsokdo Album. See Hyewon pungsokdo for a complete gallery of this album (30 paintings).


In the novel Painter of the Wind by Lee Jung-myung, Hyewon is portrayed as a woman disguised as a man.