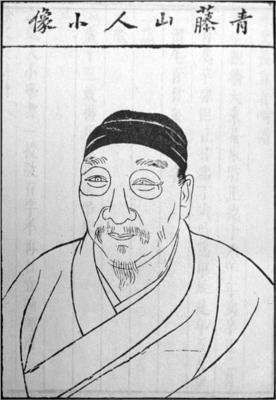 Xu Wei (Chinese: 徐渭; pinyin: Xú Wèi; Wade–Giles: Hsü Wei, 1521–1593) was a Ming dynasty Chinese painter, poet, writer and dramatist famed for his artistic expressiveness. Revolutionary for its time, his painting style influenced and inspired countless subsequent painters, such as Bada Shanren, the Eight Eccentrics of Yangzhou, and the modern masters Wu Changshuo and Qi Baishi. Qi once exclaimed in a poem that "How I wish to be born 300 years earlier so I could grind ink and prepare paper for Green Vine ( A Xu Wei pen name)" (恨不生三百年前，為青藤磨墨理紙). Xu Wei can be considered as the founder of modern painting in China. His influence continues to exert itself. Despite his posthumous recognition, Xu was manifestly mentally ill and unsuccessful in life, ending his life in poverty after the murder of his third wife and several attempts at suicide.

Xu's courtesy names were Wenqing (文清) and then later Wenchang (文長). His pseudonyms were "The Mountain-man of the Heavenly Pond" (天池山人 Tiānchí Shānrén), "Daoist of the Green Vine House" (青藤道士 Qīngténg Dàoshì) and "The Water and Moon of the Bureau's Farm" (署田水月 Shǔtián Shuǐ Yuè). Born in Shanyin (山阴 - now Shaoxing in Zhejiang Province), Xu was raised by a single mother who died when he was 14. At 21, he married a woman surnamed Pan (潘氏), who died five years later. Though he passed the county civil examination at age 20, Xu was never able to pass the provincial civil service examinations, even after attempting it eight times. Nevertheless, Xu was employed by Hu Zongxian, Supreme Commander of the Jiangsu-Zhejiang-Fujian coastal defense against the wokou pirates.

After General Hu was arrested and lost his position, Xu Wei feared a similar fate for himself. Xu became mentally distraught at this juncture, attempting to commit suicide nine times, such as by axing himself in the skull and drilling both of his ears. His mental imbalance led to his killing of his second wife Zhang (張氏) after becoming paranoid that she was having an affair. As a punishment for this murder, he was jailed for seven years until his friend Zhang Yuanbian (張元忭) from the Hanlin Academy managed to free him at age of 53. It is possible Xu Wei suffered from bipolar disorder, a condition actually recognized in China at this time. Xu spent the rest of his life painting, but with little financial success. However, his paintings have been highly sought after in modern times.

Xu was a playwright who wrote the following four plays: The Heroine Mulan Goes to War in Her Father's Place (雌木蘭 Ci Mulan): describes Hua Mulan, A Female Degree Holder (女狀元 Nüzhuangyuan): The Adventures of the Intelligent Huang Chongjia (黃崇嘏), The History of the Mad Drum (狂鼓史 Kuanggu Shi): crimes of Cao Cao, and A Zen Master's Dream of the Land of Green Jade (翠鄉夢 Cuixiang Meng): a Buddhist story. Xu's dramatic efforts often deal with women's themes and Xu can be regarded as something of an early women's rights advocate.

The British orientalist Arthur Waley, in his introduction to the 1942 translation of Jin Ping Mei argued that Xu Wei was the author but later scholars have not been convinced.