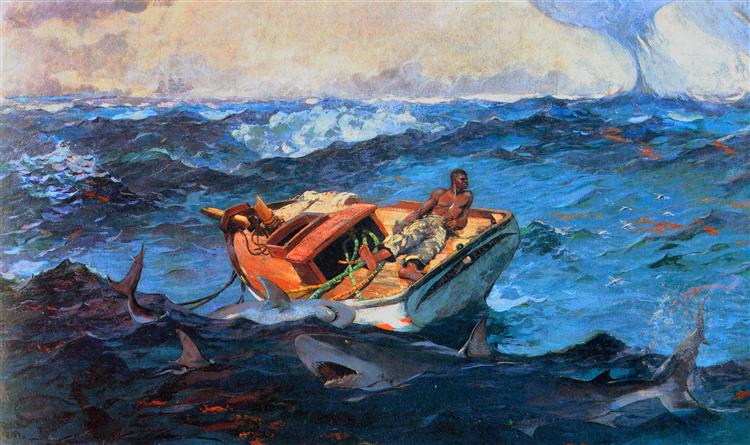 The Gulf Stream is an 1899 oil painting by Winslow Homer. It shows a black man in a small dismasted rudderless fishing boat struggling against the waves of the sea, and was the artist's last statement on a theme that had interested him for more than a decade. Homer vacationed often in Florida, Cuba, and the Caribbean.

Homer crossed the Gulf Stream numerous times; his first trip to the Caribbean in 1885 seems to have inspired several related works dated from the same year, including a pencil drawing of a dismasted boat, a large watercolor The Derelict (Sharks), and a larger watercolor of the forward part of the boat, Study for "The Gulfstream". A later watercolor study was The Gulfstream of 1889, in which the disabled boat now includes a black sailor and flailing shark. Additionally, there are other related watercolors; the shark in Shark Fishing of 1885 was later appropriated for The Gulfstream of 1889, and a watercolor of 1899 entitled After the Hurricane, in which a figure lies unconscious beside his beached boat, represents the finale of the watercolor narrative of man against nature.

Another possible inspiration for the series of watercolors and The Gulf Stream itself was McCabe's Curse, a Bahamian tale about a British Captain McCabe who in 1814 was robbed by thieves, hired a small boat in hopes of reaching a nearby island, but was caught in a storm and later died in Nassau of yellow fever; Homer saved an account of the story and pasted it into a travel guide.

A visit to Nassau and Florida between December 1898 and February 1899 immediately preceded the final painting. Homer began work on the painting by September 1899, at which time he wrote: "I painted in water colors three months last winter at Nassau, & have now just commenced arranging a picture from some of the studies." Chronologically the first of a series of major works painted by Homer in the last decade of his life, The Gulf Stream was painted in the penultimate year of the century, the year after the death of his father, and has been seen as revealing his sense of abandonment or vulnerability.

In 1900 Homer sent The Gulf Stream to Philadelphia to be exhibited at the Pennsylvania Academy of the Fine Arts, and after it was returned later that year he wrote "I have painted on the picture since it was in Philadelphia & improved it very much (more of the Deep Sea water than before)." In fact, comparison with an early photograph of the painting shows that Homer not only reworked the ocean, but changed the starboard gunwale by breaking it, added the sail and the red dash of color near the waterline, made the boat's name (Anna – Key West) clearly legible, and painted in the ship at the upper left horizon—possibly to mitigate the sense of desolation in the work. He then showed the painting at the Carnegie Institute in Pittsburgh, and asked $4,000 for it.

In 1906 The Gulf Stream was exhibited at the National Academy of Design, and all the members of the academy's jury petitioned the Metropolitan Museum of Art to purchase the painting. Newspaper reviews of the work were mixed; it was seen as more melodramatic than Homer's usual work. A reviewer in Philadelphia noted that viewers had laughed at the painting, which he referred to as "Smiling Sharks", describing the scene as "a naked negro lying in a boat while a school of sharks [are] waltzing around him in the most ludicrous manner". Another contemporary critic wrote that The Gulf Stream "displays a certain diffusion of interest seldom seen in the canvases of [Homer's] best manner". The museum bought the painting the same year.