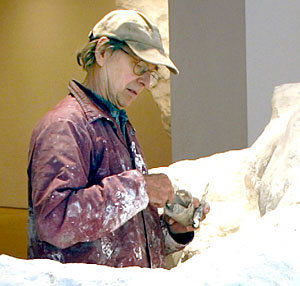 Tucker was born to English parents in Cairo, Egypt in 1935. In 1937, his family returned to England, where Tucker was raised. He attended the University of Oxford from 1955–58. He continued his sculpture studies at Saint Martin's School of Art in London, where Anthony Caro was teaching. His "Meru" series was included alongside Caro at the seminal 1966 exhibit, "Primary Structures" at the Jewish Museum in New York. Tucker spent two years as a Gregory Fellow at the Fine Arts Department of the University of Leeds (1968–70) and represented Britain at the 1972 Venice Biennale. Tucker is also a writer and in 1974 published The Language of Sculpture (Thames & Hudson, London), which was released in the United States in 1978 as Early Modern Sculpture (Oxford University Press, He moved to New York in 1978 and taught at Columbia University and at the New York Studio School of Drawing, Painting and Sculpture. He received the Guggenheim Fellowship for Sculpture in 1981 and the National Endowment for the Arts fellowship in 1986. Tucker became an American citizen in 1985. He served as co-chairman of the Art Program at Bard College.

In 2010, Tucker was a recipient of the International Sculpture Center's Lifetime Achievement in Contemporary Sculpture Award.

Recent one-person museum exhibitions included Tucker: Mass and Figure at the Museo de Bellas Artes de Bilbao in 2015, and William Tucker at the Kunstmuseum Winterthur in Switzerland in 2016.