{{selectedLanguage.Name}}
Sign In Sign out
Action History
×
Home/ Artists / Post-Impressionism .../ William Orpen/ The Signing of Peace in the Hall of Mirrors, Versailles, 28 June 1919 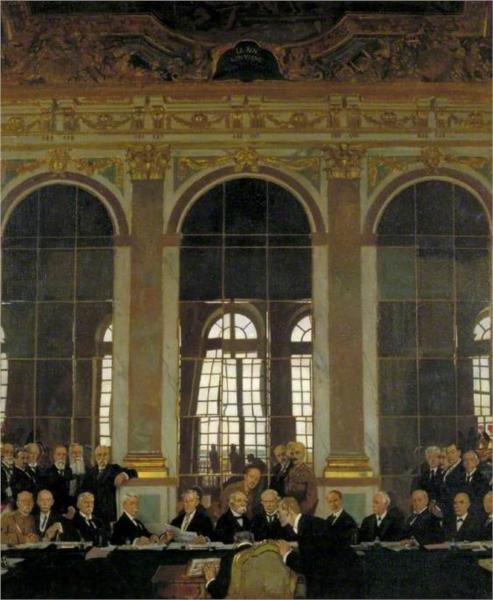 The Signing of Peace in the Hall of Mirrors, Versailles, 28 June 1919

The Signing of Peace in the Hall of Mirrors, Versailles, 28 June 1919 is an oil-on-canvas painting by Irish artist William Orpen, completed in 1919. It was one the paintings commissioned from Orpen to commemorate of the Peace Conference at Versailles in 1919. The work is held by the Imperial War Museum in London.

Orpen was one of the first people chosen as a war artist by the British Ministry of Information in 1917. Orpen was also official painter at the peace conference, and was commissioned to paint three canvases to record the proceedings. The work was the most expensive of the British public art commissions associated with the First World War: Orpen was paid £3,000: by comparison, John Singer Sargent received £300 for his much larger painting Gassed.

The painting depicts the signature of the Treaty of Versailles by representatives from Germany on 28 June 1919, to formally end the First World War. It is a group portrait depicting soldiers, diplomats and politicians who attended the conference, at the point when the treaty was signed in the opulent surroundings of Louis XIV's Hall of Mirrors at the Palace of Versailles. High up can be seen the words "Le Roy Gouverne par lui meme" (French: "The King governs alone"). It measures 152.4 × 127 centimetres (60.0 × 50.0 in).

Orpen grew to dislike the politicians at the conference, considering them vain and greedy. In his painting, they are dwarfed by the scale of the palace.

The people depicted are:

In the front row:

Seated in the middle row, from left to right:

Standing in the back row, from left to right

Orpen is depicted twice, as an indistinct figure visible in the distorting mirrors behind the main subjects.

Orpen's other paintings of the conference depict preliminary discussions of the "Council of Ten" in the Hall of Clocks at the French Ministry of Foreign Affairs at the Quai d'Orsay, and another showing a coffin lying in state in a marble hall covered by a Union Flag.