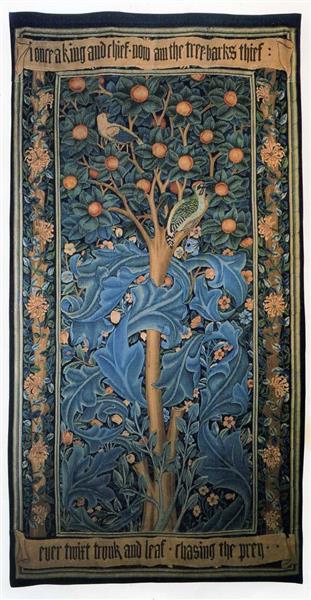 Woodpecker tapestry was designed entirely by William Morris and depicted a bird and a woodpecker sitting in a tree garlanded with flowers and swirling leaves. The subject is taken from the Latin poet Ovid's Metamorphoses. It refers to the legend of Picus, one of the ancient kings of Italy, who refused to be seduced by Circe and in revenge was turned into a woodpecker.

Most of Morris's best-known tapestry designs were created in collaboration with artists, such as Philip Webb and Edward Burne-Jones. The classic design for Woodpecker Tapestry, however, is the product of his imagination and technical skill alone. Standing at three meters high, the work was devised on a grand scale, originally intended to be hung in a billiard room in London. Above and below the birds are two scrolls, bearing an inscription that would later be published as one of a series of Verses for Pictures in Morris's Poems By the Way (1891):

The extent to which Morris drew from medieval sources is abundantly clear from the design of this work: not only in its gothic lettering and busy pattern-work but from the decision to employ tapestry as an artistic medium. Whilst hand-woven textiles had lined the halls of royal courts in the Middle Ages, by the 19th-century tapestry had fallen far from the fashionable taste. Morris remedied this not only by creating various modern takes on medieval tapestry patterns but also by learning the craft himself. Synthesizing these ancient sources of inspiration with a modern attitude to nature, he created a decorative design that is as complex in the thematic association as it is beautiful.

The combination of words and image, that is, means that the viewer is not only invited to follow the curves of trunk and branch, but also to contemplate the allegorical value of the illustration. Perhaps the poem contains a kernel of Morris's socialist worldview. The king appears to mourn his fall from power, but it is easy to question the validity of his lament: how can he mourn in such a beautiful natural setting?