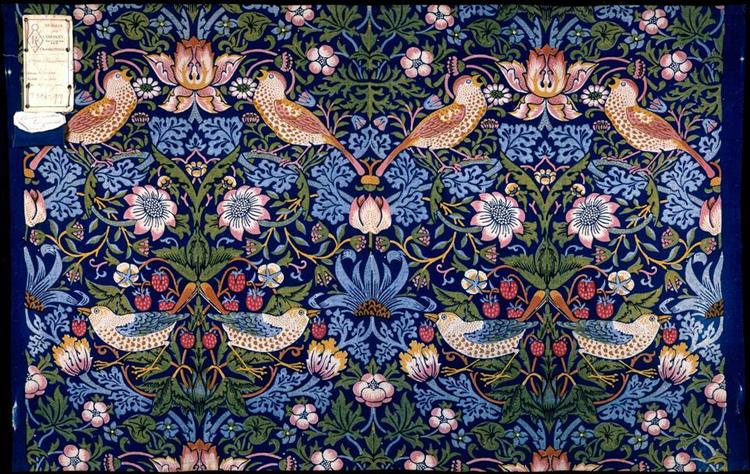 Strawberry Thief is the best known of Morris's decorative textile designs, one on which he worked for several months before finding a way of printing it successfully. The fabric was intended to be used for curtains or hung along walls, a medieval style of decoration which the artist advocated. The pattern, meanwhile, was based on the thrushes that would steal strawberries from the kitchen in his country home at Kelmscott Manner and was therefore imbued with nostalgic sentiment. While the foliate designs are intricate and eye-catching, and the general design provides little depth between foreground and background, the birds remain a focal point due to their light color and the naturalism of their rendering. They also create an element of narrative interest, as the mischievous protagonists of a story that plays out across the surface of the fabric, entertaining with their song. At the same time, they make away with the precious berries.

These themes are redolent of the natura naturans spirit of much medieval textile art and loosely evocative of the romance and fantasy narratives of the same era. In practical terms, Morris took a great deal of interest in the craftsmanship of the Strawberry Thief design, learning the theory of fabric-dyeing and block-printing to create a pattern amenable to his chosen production process. Eventually, he settled on the ancient technique of indigo discharge, despite its costly and laborious nature, applying bleached blocks to the dyed fabric. His main concern was the depth of color in the finished product and the artisanal authenticity of the creative process.

This design has attained extraordinary commercial success since its release in the late 19th century. It continues to sell widely, with English department stores having featured it in several high-end fashion collaborations. Its popularity has recently led the Victoria and Albert Museum's designer-in-residence to create a digital game based on the design. At the same time, contemporary artists continue to look back to it. The conceptual and video artist Jeremy Deller, for example, has named an exhibition after the work and created the piece Strawberry Thief (2014), a neon light depicting one of the birds with a captured berry, in homage to it.