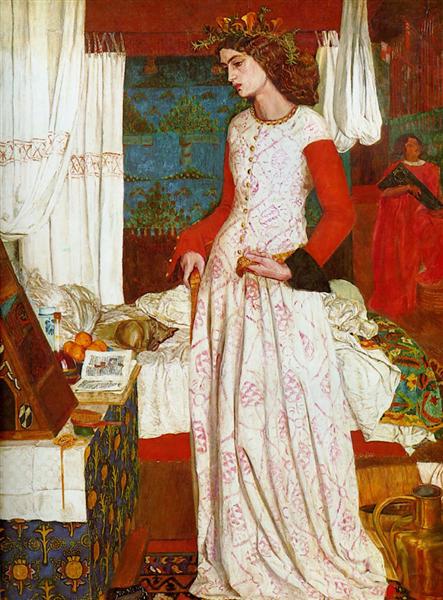 This is the only completed easel painting that William Morris produced. It is a portrait of Jane Burden, Morris's soon-to-be wife, and it is believed that he started work on it very early during their courtship. The picture has been identified in the past as Queen Guenevere, partly owing to the fact that Morris published his first volume of poetry, The Defence of Guenevere, in March 1858. However, recent research has established convincingly that the picture is intended to represent Iseult mourning Tristram's exile from the court of King Mark.

The story of Tristram and Iseult (Tristan and Isolde) is a legend of Celtic origin made famous during the medieval period by the treatment of Thomas Mallory, on which Morris based his composition. Iseult appears to have recently arisen from her bed, where a small greyhound lies curled up among the crumpled sheets. She stands wistfully in her small chamber, her feelings for Tristram reinforced by the sprigs of rosemary, symbolizing remembrance, in her crown, and the word 'DOLOURS' (grief) written down the side of her mirror.

The rich colors, the emphasis on pattern, and details such as the illuminated missal reveal where Morris's true talents lay. He was less at home with figure painting than with illumination, embroidery, and woodcarving, and he struggled for months on this picture. Many of the furnishings, such as the Turkish rug, Persian embroidered cover, and whitework hangings on the bed, were probably in Morris's personal collection.

The narrative of doomed lovers contains all the aspects of Medieval romance - thwarted desire, virtue, honor, chivalry - that attracted the Pre-Raphaelites to the literature and art of the period. In the scene depicted, Iseult is mourning the exile of Tristram - a knight sent to fetch her from Ireland to marry King Mark of Cornwall, only for the two to fall in love en route - from her husband's court. The tale was one that Morris had previously represented in the Oxford Union Murals, and the influence of the Pre-Raphaelite artists with whom he undertook that project, particularly Rossetti, is evident. At the same time, we might trace a thread of affinity with the nascent Symbolist movement in continental Europe, given the heavily allegorical nature of the composition. The dog on the bed, given to Iseult by Tristram in Mallory's story, stands for loyalty, the rosemary in her crown for remembrance.

The painting also alludes in various ways to Morris's artistic and personal biography. While figural painting would never be his true calling, we can sense clues as to his future endeavors as a designer and craftsman in the finer details of the scene. On the bed is an illuminated manuscript similar to those Morris would produce with Kelmscott Press. At the same time, the lavish textiles and tapestries are reminiscent of those Morris would spend most of his career creating. As for his model, Jane's strong, striking features, which epitomized the Pre-Raphaelite ideal of beauty, also caught the attention of Morris's friend and mentor Rossetti, with whom Jane embarked on a lifelong affair, grudgingly tolerated by her husband.