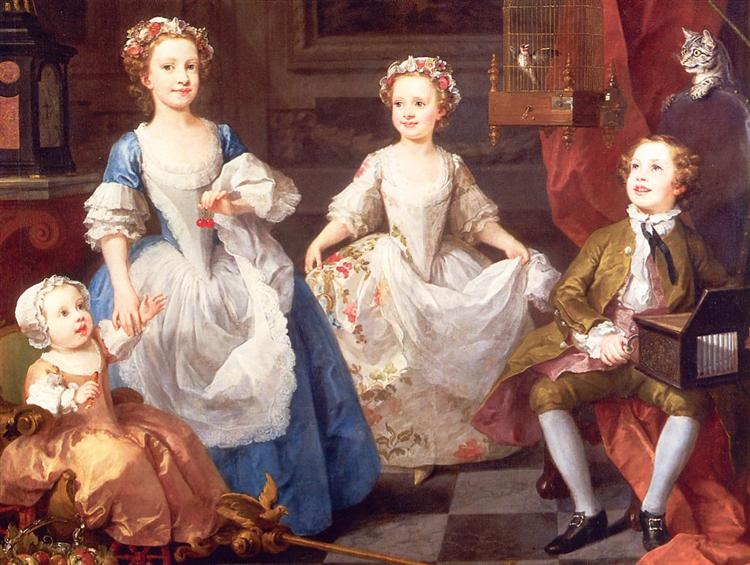 The Graham Children is an oil painting completed by William Hogarth in 1742. It is a group portrait depicting the four children of Daniel Graham, apothecary to King George II. The youngest child had died by the time the painting was completed.

The painting was in the ownership of Richard Robert Graham, depicted on the far right of the painting, at least until his death in 1816. It then had several owners before it was acquired by Lord Duveen who presented it to the British National Gallery in 1934.

The Graham Children is a conversation piece, an informal group portrait of family or friends, often engaged in conversation or some other kind of activity, though the painting is larger than a typical work of that type. From left to right in the picture are Thomas, born 1740 and dressed in skirts as was typical for small boys until they were breeched, Henrietta, Anna Maria and Richard.

Infant mortality in Britain was high in the eighteenth century, even for the children of the wealthy, and Thomas had died before the painting was completed. Hogarth used a study, probably completed after Thomas's death, as the basis for his image. With its numerous references to death and the passage of time, it may be that the painting is a form of memorial for Thomas.

The children are painted life size, surrounded by plush furnishings and fabrics that reflect the family's wealth. A gilded bird cage is suspended from a cord and Thomas sits in an ornate baby cart with a fine silver fruit bowl at his feet. Richard plays a tune on a bird-organ, apparently making the bird sing.

The French Rococo was at its height in the 1730s and its influence can be seen in the painting despite Hogarth not visiting France until 1743. William Gaunt thought that Hogarth was more familiar with current French painting than he liked to admit. The girl's aprons form serpentine S's, vertically in the oldest child, ending as it falls over her arm, and horizontally in the younger girl. A similar shape can be seen in the falling curtain on the right. The heads of the children and the cat create another noticeable S shape. The fruit bowl, a common subject in Rococo art, has been described as a "bravura piece of still-life painting" untypical of Hogarth's work.

David Bindman described The Graham Children as having a theme worthy of a history painting. Hogarth turned what could have been a simple family scene, even one with a tragic edge, into a parable about the “passing of time and the vulnerability of innocence”. The picture plays with time with different parts moving at different speeds. The boys are captured in mid movement, like the cat and bird, while the girls seem to be completely still, so that the picture is both a snap shot of a fleeting moment and a static portrait simultaneously. The oldest, Henrietta, holds the wrist of the youngest, perhaps indicating her future role as a mother, but not tightly and neither exchange looks, but neither do any of the children. Henrietta, instead, looks at the spectator, indicating her awareness of the adult world that she will soon join. The other children, however, remain in the innocent bubble of childhood.