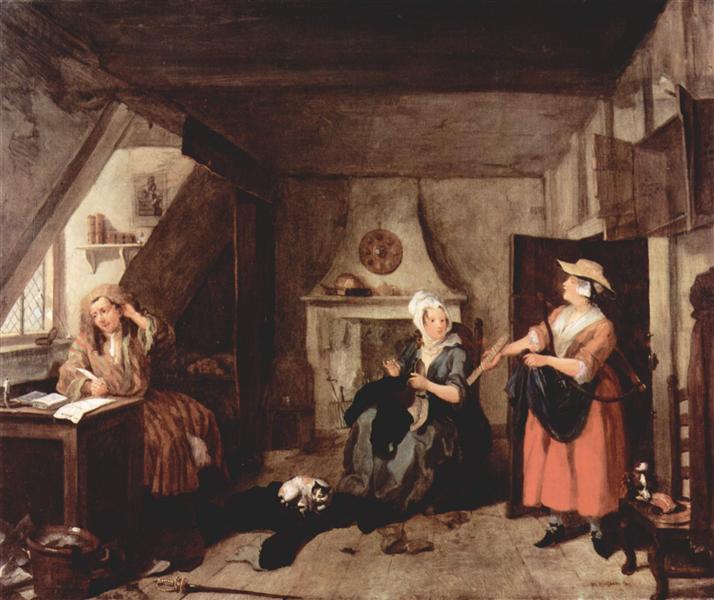 The Distrest Poet is an oil painting produced sometime around 1736 by the British artist William Hogarth. Reproduced as an etching and engraving, it was published in 1741 from a third state plate produced in 1740. The scene was probably inspired by Alexander Pope's satirical poem The Dunciad. It depicts a scene in a small, dingy attic room where a poet sits at his desk in the dormer and, scratching his head, stares at the papers on the desk before him, evidently looking for inspiration to complete the poem he is writing. Near him sits his wife darning clothes, surprised by the entrance of a milkmaid, who impatiently demands payment of debts.

The engraving of The Distrest Poet in its third state was issued on 15 December 1741 as a companion piece to The Enraged Musician, a comic scene of a violinist driven to distraction by the noise from the street outside his practice room. The initial plate for The Distrest Poet was produced soon after Hogarth had completed the oil painting, but the third state plate was not completed until late in 1740 at which time Hogarth advertised his intention to issue a three-image set: The Provok'd Musician, The Distrest Poet, and a third image on the subject of "Painting". The Provok'd Musician (renamed The Enraged Musician) was produced in 1741 but the third image was never completed.

The scene is set in a small and messy garret, sparsely furnished by a few pieces of crude furniture. The room is poorly kept, with cracking plaster, a broken window and uneven floor, and a bare cupboard. In this way, Hogarth underlines the desperate circumstances of the occupants and the poverty of the family.

Starved of inspiration and suffering writer's block, the poet sits on the end of his bed in his night gown, quill in hand, scratching his head. A copy of Edward Bysshe's The Art of English Poetry, a guide to composition published in 1702, lies open on the table. A copy of Popes's satirical Grub Street Journal lies on the floor near his feet.

A few feet to his right sits his wife, darning the clothes on her lap and those sprawled on the floor, where a cat sits, while a crying infant, who is upset and hungry, goes unattended in the only bed. Next to the poet's wife, by the open door, an angry milkmaid presents her substantial bill, demanding payment for milk, underlining the poet's refusal to provide for his family by getting himself a proper job. The cupboard stands open and empty, save for a mouse; near the door, a dog steals the last of the family's food from a plate.

Other, less obvious, elements of the painting reveal more about the poet's personality and ideas. The poem he is attempting to write is entitled "Upon Riches", which suggests that the poet lives in a fantasy world, while his wife and child go hungry. Ned Ward's first published poem in 1691 was The Poet's Ramble After Riches, which satirised his own struggles as an impoverished aspiring poet, and Hogarth may have had this in mind when he produced the picture. Earlier impressions showed the poem as "Poverty, A Poem", which hinted at a connection to Theobald who had written "The Cave of Poverty, A Poem, Written in Imitation of Shakespeare" in 1714. The poet's dreams of riches are further suggested by the map that hangs over his head, entitled "A View of the Gold Mines of Peru", replacing the image of Pope that appears in the earlier states of the print. The poet's self-interest is hinted by the presence of his pipe and tobacco on the window sill, the mug of beer sitting on the chair in the back of the room, the lace cuffs drying by the fire, his ill-fitting wig, and gentleman's sword lying at his feet; it may be that despite his family's circumstances, he refuses to forgo his own personal pleasures and effects. Alternatively, his fantasy of earning a fortune from his art may require that he keeps his gentlemanly accoutrements around him, as they will be required when his fantasies are realized.