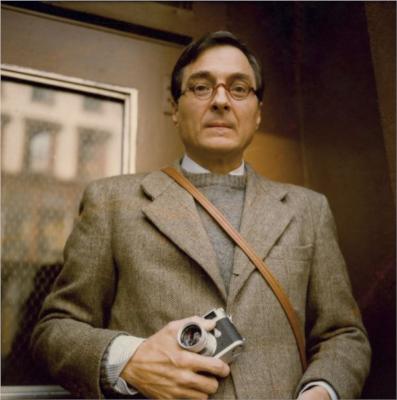 William Eggleston (born July 27, 1939) is an American photographer. He is widely credited with increasing recognition for color photography as a legitimate artistic medium to display in art galleries.

William Eggleston was born in Memphis, Tennessee and raised in Sumner, Mississippi. His father was an engineer and his mother was the daughter of a prominent local judge. As a boy, Eggleston was introverted; he enjoyed playing the piano, drawing, and working with electronics. From an early age, he was also drawn to visual media, and reportedly enjoyed buying postcards and cutting out pictures from magazines.

At the age of 15, Eggleston was sent to the Webb School, a boarding establishment. Eggleston later recalled few fond memories of the school, telling a reporter, "It had a kind of Spartan routine to 'build character'. I never knew what that was supposed to mean. It was so callous and dumb. It was the kind of place where it was considered effeminate to like music and painting." Eggleston was unusual among his peers in eschewing the traditional Southern male pursuits of hunting and sports, in favor of artistic pursuits and observation of the world. Nevertheless, Eggleston noted that he never felt like an outsider. "I never had the feeling that I didn't fit in," he told a reporter, "But probably I didn't."

Eggleston attended Vanderbilt University for a year, Delta State College for a semester, and the University of Mississippi for about five years, but did not complete any degree. Nonetheless, during these university years his interest in photography took root when a friend at Vanderbilt gave Eggleston a Leica camera. Eggleston went on to study art at Ole Miss and was introduced to abstract expressionism by visiting painter Tom Young.

Eggleston's early photographic efforts were inspired by the work of Swiss-born photographer Robert Frank, and by French photographer Henri Cartier-Bresson's book, The Decisive Moment. Eggleston later recalled that the book was "the first serious book I found, from many awful books...I didn't understand it a bit, and then it sank in, and I realized, my God, this is a great one.” First photographing in black-and-white, Eggleston began experimenting with color in 1965 and 1966 after being introduced to the medium by William Christenberry. Color transparency film became his dominant medium in the later 1960s. Eggleston's development as a photographer seems to have taken place in relative isolation from other artists. In an interview with Director of Photography at New York's Museum of Modern Art (MoMA) John Szarkowski describes his first encounter with the young Eggleston in 1969 as being "absolutely out of the blue". After reviewing Eggleston's work (which he recalled as a suitcase full of "drugstore" color prints) Szarkowski prevailed upon the Photography Committee of MoMA to buy one of Eggleston's photographs.

In 1970, Eggleston's friend William Christenberry introduced him to Walter Hopps, director of Washington, D.C.'s Corcoran Gallery. Hopps later reported being "stunned" by Eggleston's work: "I had never seen anything like it."

Eggleston taught at Harvard in 1973 and 1974, and it was during these years that he discovered dye-transfer printing; he was examining the price list of a photographic lab in Chicago when he read about the process. As Eggleston later recalled: "It advertised 'from the cheapest to the ultimate print.' The ultimate print was a dye-transfer. I went straight up there to look and everything I saw was commercial work like pictures of cigarette packs or perfume bottles but the colour saturation and the quality of the ink was overwhelming. I couldn't wait to see what a plain Eggleston picture would look like with the same process. Every photograph I subsequently printed with the process seemed fantastic and each one seemed better than the previous one." The dye-transfer process resulted in some of Eggleston's most striking and famous work, such as his 1973 photograph entitled The Red Ceiling, of which Eggleston said, "The Red Ceiling is so powerful, that in fact I've never seen it reproduced on the page to my satisfaction. When you look at the dye it is like red blood that's wet on the wall.... A little red is usually enough, but to work with an entire red surface was a challenge."