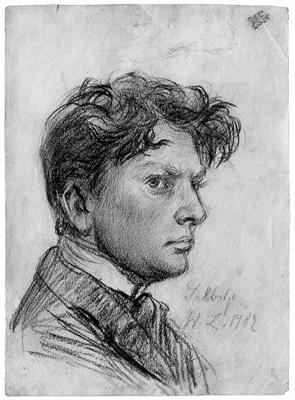 
Born in Meiderich (part of Duisburg from 1905), he was the fourth of eight children born to the miner Wilhelm Lehmbruck and his wife Margaretha. He was able to study sculpture arts at the School of Applied Arts in Düsseldorf by a stipend from the municipal authorities. In 1899 he began to make a living by doing illustrations for scientific publications. He trained at the Kunstakademie Düsseldorf and is associated with the Düsseldorf school of painting from 1901 to 1906. On leaving the academy Lehmbruck worked as an independent artist in Düsseldorf. He exhibited for the first time at the Deutsche Kunstausstellung, in Cologne in 1906. He was impressed by the sculptures of Auguste Rodin, and traveled to England, Italy, the Netherlands, and Paris. In 1907, he married Anita Kaufmann, and they had three sons.


In 1912 Lehmbruck exhibited in the Folkwang Museum in Hagen, with Egon Schiele. In 1914, he had his first solo exhibition in Paris, at the Galerie Levesque. He contributed to an exhibition at the Grand Palais in Paris. From 1910–1914 he lived in Paris. He frequented the Café du Dôme, where he met sculptors such as Modigliani, Brâncuși, and Archipenko.


During World War I he served as a paramedic at a military hospital in Berlin. The suffering and misery he saw there are reflected in his late sculptures such as Fallen Man (1915–16). He suffered from severe depression and fled the war by going to Zürich at the end of 1916. There he made contact with the socialist, L. Rubiner, who collaborated on Franz Pfemfert's Aktion. He was elected to the Prussian Academy of Arts in Berlin in early 1919. After the war he returned to Berlin where he committed suicide on March 25, 1919.


Lehmbruck's sculptures mostly concentrate on the human body and are influenced by Naturalism and Expressionism. His works, including female nudes, are marked by a sense of melancholy and an elongation of form common to Gothic architecture.


Throughout his career, architect Ludwig Mies van der Rohe placed his friend Lehmbruck's sculptures and those of Aristide Maillol into his buildings and designs.


The Lehmbruck Museum (Duisburg, Germany) has in its collection about 100 sculptures, 40 paintings, 900 drawings and 200 graphical works by Wilhelm Lehmbruck. The museum, named after Wilhelm Lehmbruck, was originally designed by his son, Manfred Lehmbruck (1913–1992).


The Honolulu Museum of Art, the Museum of Modern Art (New York City), the National Gallery of Art (Washington D.C.), Städel Museum (Frankfurt, Germany), and the Tate Gallery (London, England) are among the public collections holding works by Wilhelm Lehmbruck. One of his sculptures can be seen in the Villa Tugendhat.