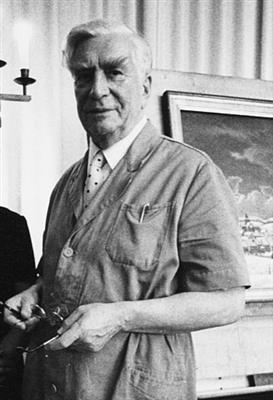 Werner Peiner (20 July 1897 – 19 August 1984) was a German painter. He was first influenced by expressionism, but he became one of the most known and talented official painters of the Third Reich.


Peiner was born at Düsseldorf. His major influences came from the German Romantic and Realistic painters. In some of his best works there can be noticed also some expressionist influences, like in the tapestries of The Four Hoursemen of the Apocalypse, executed in 1937.


Like other German painters favored during the Third Reich, such as Conrad Hommel and Adolf Wissel, his reputation in the Western world was tainted after World War II - he then worked e.g. for the Ethiopian Emperor Haile Selassie.


In his last decades, he was mainly a landscape painter. He died at Leichlingen in 1984.