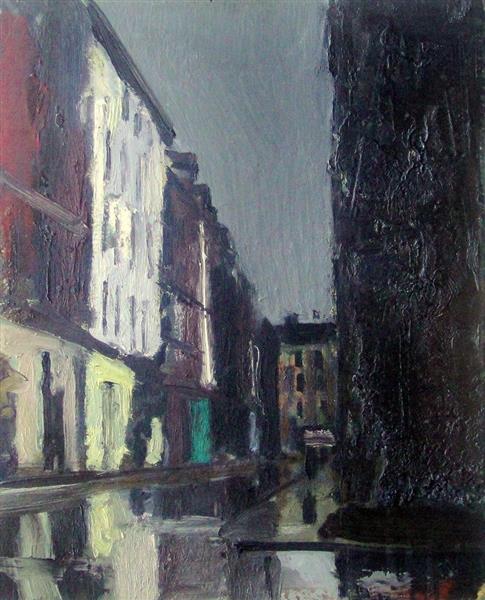 Vladimir Tatlin is an influential figure in Russian avant-garde, an undaunted inventor of new forms of art and artistic language. He is considered the founder of Russian constructivism. Tatlin’s name is associated with the most daring experiments in the art of the 20th century. He combined plastics and spatial forms, artistic and utilitarian properties of materials, which made it possible to completely reform the illusory nature of the pictorial plane and bring it to three-dimensional scale. In his early paintings Tatlin was influenced by Pablo Picasso, further advancing and mastering his cubistic theories. He operated with large, rhythmically coordinated surfaces combining the features of cubism, modernism and futurism, expressively embodied the universal rhythm. In his book "Tatlin (Against Cubism)” published in 1921, Nikolai Punin presented a coherent theory of the evolution of contemporary art. Punin concluded that the evolution of art progressed from predominance of light in impressionism, followed by predominance of color and modeling of spatial surfaces in Cezanne’s paintings, to the illusion of three-dimensional space and textures that replaced the predominance of color in cubists. The final stage of evolution of art was the use of real space by Tatlin. "Tatlin's creativity in terms of its formal achievements, genetically rising to the impressionism, shows everything that only mankind has gained in the field of plastic art, striving to realize its basic law-the law of loading.
However, renaissance and recognition of Tatlin’s artistic ideas in 1920’s, his art was mocked, prosecuted and forbidden during the next decades. At the exhibition "Artists of the RSFSR for 15 years" in 1933, Tatlin’s works were displayed in the hall of "formalistic trends." It was his last public exhibition. Unfortunately, not many works of the artist’s late period still exist. In the few remaining paintings we see two main tendencies: one is lyrical, ala prima, translucent, watercolor like oil paintings and the other is dramatic, intense, with bold usage of contrasting tones, reminiscent of stained-glass technique.
In this painting, we see an urban landscape, seemingly simple and peaceful composition depicting a narrow street of Leningrad. At the same time, it is full of inner tension and sense of desolation. This contradictory image is achieved by using contrasting tones and lines. Palette of the painting is very limited. The black color plays the main role, while gradations of gray, cold white and light yellow do not brighten the composition as one might expect, but instead strengthen the sense of loneliness and isolation of two human figures. The painting is dated 1936 and it could be seen as a very symbolic portrayal of its time. It had been two years since the official birth of the Soviet Social realism which was declared as a mandatory style in all fields of the Soviet culture. In opposition to the Communist guidelines, Tatlin created this painting that reflected his skeptical attitude towards the prescribed “official art.”