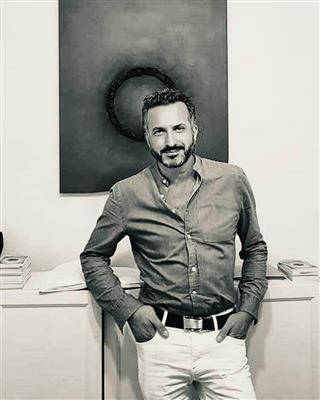 Vito Bongiorno with one of his works.

Vito Bongiorno is an Italian artist known for making art out of charcoal.
The artist has recently denounced the fragility of his country and to express his denunciation he uses coal to symbolise disease, rift, bitterness and pollution.

Vito Bongiorno is an Italian artist known for making art out of charcoal.


Bongiorno was born in Alcamo (in the province of Trapani) in 1963; his childhood was eventful because of the different movings of his family. In fact, after living the terrible experience of the Belice Earthquake in 1968, he moved to Rome when he was only seven. He graduated in art school (at the Liceo Artistico Statale), where he was a pupil of Mino Delle Site, a representative of the movement of Aeropittura. In Rome he also attended some courses of life drawing, engraving and sculpture.


In order to enlarge his experience, he first moved to Munich, and then to New York City, where he exhibited his works, and got in touch with the most important artists. While realizing his works, Bongiorno considers the human body as a basic element of the artistic expression, and the environment as the scenery of the creative work.


In July 2009, Ludovico Corrao, the former senator and president of the Museo delle Trame Mediterranee of the Foundation Orestiadi di Gibellina, purchased the work Oltremare a Gibellina for this museum. In this painting the sea blue colour should bring a town to be rebuilt, beyond the ruins of the 1968 Belice Earthquake.


During his artistic career, in 2010 the writer Costanzo Costantini labelled Bongiorno as the Italian Yves Klein, referring to his anthropometry, in line with the French painter. The artist has recently denounced the fragility of his country and to express his denunciation he uses coal to symbolise disease, rift, bitterness and pollution.


One of his most recent artistic creations is "Terra Mater" at the Museum of Contemporary Art of Rome, in May 2012. In November 2012 he won the Art & Crisis award organised by the magazine “INSIDEART” with his creation entitled Handle With Care.


In May 2014 he exhibited "Superfetazioni" at the Capitoline Museums in the Centrale Montemartini in Rome. His work "Fragile" was shown at the Maam Museum in Rome.
In May 2015 he exhibited a solo show with the provocative title L’Italia brucia (Italy is burning) at the Sant’Andrea Gallery in Rome and then he executed a performance for Exploit in Milan. In the same year he intervened with an installation at the Cà Pesaro Museum in Venice on the occasion of the Venice Biennale.


He is present in the archive of the artists of Rome Quadriennale. Some of his works of art are present in the permanent collection of the Mutuo Soccorso Museum, in the Maam Museum in Rome, and at the MACA in Alcamo.
In 2019 he created the work "Our Planet", exhibited at the Macro Museum of Rome; on 12 October he also organized the anthological exhibition entitled Nostos at the Museum of Contemporary Art of Alcamo (MACA) in Alcamo.


Bongiorno lives and works between Fregene and Rome.