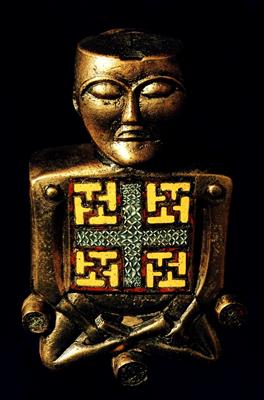 Viking art, also known commonly as Norse art, is a term widely accepted for the art of Scandinavian Norsemen and Viking settlements further afield—particularly in the British Isles and Iceland—during the Viking Age of the 8th-11th centuries CE. Viking art has many design elements in common with Celtic, Germanic, the later Romanesque and Eastern European art, sharing many influences with each of these traditions.


Generally speaking, the current knowledge of Viking art relies heavily upon more durable objects of metal and stone; wood, bone, ivory and textiles are more rarely preserved; human skin, which historical sources indicate was often elaborately tattooed, is nowhere extant and is unlikely to have survived. The artistic record therefore, as it has survived to the present day, remains significantly incomplete. Ongoing archaeological excavation and opportunistic finds, of course, may improve this situation in the future, as indeed they have in the recent past.


Viking art is usually divided into a sequence of roughly chronological styles, although outside Scandinavia itself local influences are often strong, and the development of styles can be less clear.


The Vikings' regional origins lay in Scandinavia, the northern-most peninsula of continental Europe, while the term 'Viking' likely derived from their own term for coastal raiding—the activity by which many neighbouring cultures became acquainted with the inhabitants of the region.


Viking raiders attacked wealthy targets on the north-western coasts of Europe from the late 8th until the mid-11th century CE. Pre-Christian traders and sea raiders, the Vikings first enter recorded history with their attack on the Christian monastic community on Lindisfarne Island in 793.


The Vikings initially employed their longships to invade and attack European coasts, harbours and river settlements on a seasonal basis. Subsequently, Viking activities diversified to include trading voyages to the east, west and south of their Scandinavian homelands, with repeated and regular voyages following river systems east into Russia and the Black and Caspian Sea regions, and west to the coastlines of the British Isles, Iceland and Greenland. Evidence exists for Vikings reaching Newfoundland well before the later voyages of Christopher Columbus discovered the New World.


Trading and merchant activities were accompanied by settlement and colonisation in many of these territories.


Wood was undoubtedly the primary material of choice for Viking artists, being relatively easy to carve, inexpensive and abundant in northern Europe. The importance of wood as an artistic medium is underscored by chance survivals of wood artistry at the very beginning and end of the Viking period, namely, the Oseberg ship-burial carvings of the early 9th century and the carved decoration of the Urnes Stave Church from the 12th century. As summarised by James Graham-Campbell: "These remarkable survivals allow us to form at least an impression of what we are missing from original corpus of Viking art, although wooden fragments and small-scale carvings in other materials (such as antler, amber and walrus ivory) provide further hints. The same is inevitably true of the textile arts, although weaving and embroidery were clearly well-developed crafts."


With the exception of the Gotlandic picture stones prevalent in Sweden early in the Viking period, stone carving was apparently not practised elsewhere in Scandinavia until the mid-10th century and the creation of the royal monuments at Jelling in Denmark. Subsequently, and likely influenced by the spread of Christianity, the use of carved stone for permanent memorials became more prevalent.