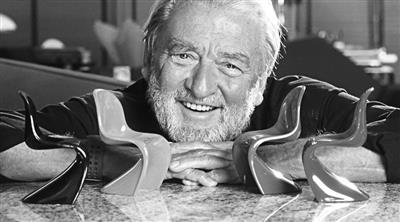 Verner Panton (13 February 1926 – 5 September 1998) is considered one of Denmark's most influential 20th-century furniture and interior designers. During his career, he created innovative and futuristic designs in a variety of materials, especially plastics, and in vibrant and exotic colors. His style was very "1960s" but regained popularity at the end of the 20th century. As of 2004, Panton's best-known furniture models are still in production (at Vitra, among others).


Panton was already an experienced artist in Odense when he went to study architecture at the Royal Danish Academy of Art (Det Kongelige Danske Kunstakademi) in Copenhagen, graduating in 1951. During the first two years of his career, 1950–1952, he worked at the architectural practice of Arne Jacobsen, another Danish architect and furniture designe. Panton turned out to be an "enfant terrible" and he started his own design and architectural office. He became well known for his innovative architectural proposals, including a collapsible house (1955), the Cardboard House and the Plastic House (1960). Near the end of the 1950s, his chair designs became much more unconventional, with no legs or discernible back. In 1960 Panton was the designer of the very first single-form injection-moulded plastic chair. The Stacking chair or S chair was mass produced and became the most famous of his designs derived from organic shapes echoing curves of the human body – in this case the tongue.


In the late 1960s and early 1970s, Verner Panton experimented with designing entire environments: radical and psychedelic interiors that were an ensemble of his curved furniture, wall upholstering, textiles and lighting. He is perhaps best known for a series of interior designs for Bayer's yearly product exhibition, held aboard excursion boats.


From 1950 to 1952, Verner Panton worked for the architect Arne Jacobsen, who became another important mentor. While at Jacobsen's office, Panton worked primarily in furniture design- specifically, the development of the ‘Ant’ chair. Following his employment with Jacobsen, Panton took a number of extensive trips throughout Europe over the course of three years. During this time, he establishes a number of international contacts with design colleagues, manufacturers, and dealers. From this, Panton is given a large number of architectural and furniture designs including the Bachelor Chair and Trivoli Chair commissioned by prestigious Danish furniture manufacturer Fritz Hansen in 1955.


In the mid-Fifties Verner Panton for the first time occupied himself with the idea of a chair made from one single element. In 1956 the Neue Gemeinschaft für Wohnkultur (WK-Möbel) organized a competition in which Panton participated. His entry was an entire furniture collection, which also included a stackable chair in which the seat and backrest formed a single unit. This is the project from which the so-called 'S Chair' is derived. The competition entry itself was not successful, with his designs failing to win a prize. In 1957, a prefabricated weekend house is produced as a small series called the All Round House.


In 1958, Panton redesigned his parents’ inn, Kom-igen in the Langesø Park on the island of Fünen, for which he also designed the Cone Chair. The Kom-igen inn was one of Panton’s first major commissions. Panton designed the interior as well as a one-floor extension with a roof terrace. He used five different shades of red for the interior to give it warmth while including dark colors for the table linens. Panton developed a flexible system made of fabrics with geometrical patterns to hang from the ceiling to divide up the room. From this, began the start of the cooperation with the Danish firms of Plus-Linje (Cone Chair series furniture), Unika Væv (textiles) and Louis Poulsen (lighting).